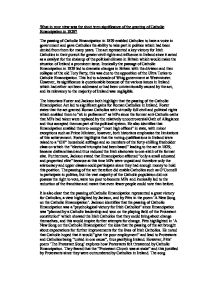 What in your view was the short term significance of the granting of Catholic Emancipation in 1829?

Furthermore, Jackson stated that Emancipation affected "only a small educated and propertied elite" because at this time MPs were unpaid and therefore only the aristocracy and upper classes could participate since they had enough money to hold this position. The passing of the act therefore did enable Catholics such as O'Connell to participate in politics, but the vast majority of the Catholic population did not possess the right to vote, were too poor to become MPs and ironically led to the reduction of the franchise and meant that even fewer people could vote than before. It is also clear that the passing of Catholic Emancipation represented a great victory for Catholics, a view highlighted by Jackson, and by Pitts in the poem 'A New Song on the Catholic Emancipation'. Jackson identifies that the passing of Catholic Emancipation was a "psychological victory for Irish Catholics" since Emancipation was "planned by a Catholic leadership and won on the playing field of ...read more.

This assessment is supported by Gerville as he stated that the Protestants desired "nothing so much as to provoke the Catholics into acts of violence and outrage", but Gerville does admit that "both sides are to blame, but the Protestants the most" for the occurrence of "massacres and tumults" after the passage of Catholic Emancipation. This view is valid since the aim of his memoirs was to take an accurate history of the events occurring around him so he wasn't inclined to support one side over another. The passing of the Catholic Emancipation Act of 1829 was a landmark event in Irish history since it removed the barriers to Catholics playing a full part in the political system. However the short term significance of the Act were minimal as although it allowed Catholics to sit as MPs, the vast majority of the population still could not vote as the Act reduced the franchise. ...read more.