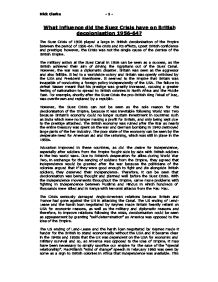 What influence did the Suez Crisis have on British decolonisation 1956-64?

What influence did the Suez Crisis have on British decolonisation 1956-64? The Suez Crisis of 1956 played a large in British decolonisation of the Empire between the period of 1956-64. The crisis and its effects, upset British confidence and prestige; however, the Crisis was not the single cause of the demise of the British Empire. The military action at the Suez Canal in 1956 can be seen as a success, as the British achieved their aim of driving the Egyptians out of the Suez Canal. However, the war was a diplomatic disaster. Britain was seen as the aggressor and also fallible. It led to a worldwide outcry and Britain was openly criticised by the USA and President Eisenhower. It seemed to the Empire that Britain was incapable of conducting a foreign policy independently of the USA. ...read more.

The poor state of the economy can be seen by the desperate need for American aid and the rationing, which was still in place in the 1950s. Education improved in these countries, as did the desire for independence, especially after soldiers from the Empire fought side by side with British soldiers in the two world wars. Due to Britain's desperation for allies during World War Two, in exchange for the sending of soldiers from the Empire, they agreed that independence would be granted after the war because the politicians of the colonies argued that if they were good enough to fight and die alongside British soldiers, they deserved their independence. Therefore, it can be seen that decolonisation was being thought and planned well before the Suez Crisis. ...read more.

opposed to the idea of Empire, it may have been necessary to simply sacrifice our empire for the sake of the "special relationship". MacMillan's "wind of change" speech in February 1960 was seen by some as a sign to British colonies in Africa that independence was available. This could be seen as an attempt by MacMillan to improve Anglo-American relations ruined by the Suez Crisis, by giving up her Empire. It can be seen that Suez was a very important factor in Britain's rapid decolonisation between 1956 and 1964, and it was the cause of many spin-offs factors. However, it was not the sole reason with the rising nationalism and violence attributed with it, the Empire's failure to generate enough profit and the state of the British economy following the huge expenditure of the war effort. Nick Clarke - 1 - ...read more.