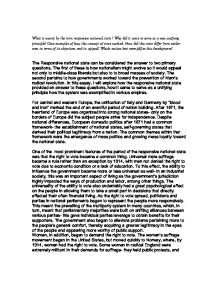 What is meant by the term responsive national state ? Why did it come to serve as a new unifying principle? Give examples of how this concept of state worked. How did this state differ from earlier ones in terms of its objectives and its appeal? Which nat

What is meant by the term responsive national state ? Why did it come to serve as a new unifying principle? Give examples of how this concept of state worked. How did this state differ from earlier ones in terms of its objectives and its appeal? Which nation best exemplifies this development? The Responsive national state can be considered the answer to two primary questions. The first of these is how nationalism might evolve so it would appeal not only to middle-class liberals but also to to broad masses of society. The second pertains to how governments worked toward the prevention of Marx's radical revolution. In this essay, I will explore how the responsive national state provided an answer to these questions, how it came to serve as a unifying principle how the system was exemplified in various empires. For central and western Europe, the unification of Italy and Germany by "blood and iron" marked the end of an eventful period of nation building. After 1871, the heartland of Europe was organized into strong national states- only on the borders of Europe did the subject people strive for independence. Despite national differences, European domestic politics after 1871 had a common framework- the establishment of national states, self-governing states that derived their political legitimacy from a nation. The common themes within that framework were the emergence of mass politics and growing mass loyalty toward the national state. ...read more.

For instance, conservative and 'modern' leaders- who usually did not support socialistic ideals- found that that industrialists and workers voting for a socialist party would rally around the flag in a diplomatic crisis. Governing elites hence frequently channeled this vein of national sentiment in an anti-liberal and military-oriented direction , helping manage domestic problems but creating international tensions along the way- tensions that erupted in 1914. The general developments of the responsive national state is best represented by the politics of the German empire at the time. The new German empire was a federal union of Prussia and twenty-four other smaller nation-states. Much of government was conducted individually by each state, but there nevertheless existed a strong national government with a chancellor- in the time period concerned with the responsive national state, this was Bismarck. Bismarck was well known for refusing to be bound by a rule of political majority, but nevertheless attempted to maintain one. This gave the various political parties in the German system many opportunities. Bismarck had, for a long time, supported the National Liberals, who deemed legislation useful for the further economic unification of the country. However, the Liberals also backed Bismarck's 'policy war' upon the Catholic church. This attack was eventually resolved in an economically advantageous alliance. The instance of Bismarck siding with a particular political party was typical of the responsive national state in that the government itself became deeply involved with the multiparty system that it had spurned through attempting to win over the people as a whole. ...read more.

The right to vote was granted to the male middle class in 1832, and following this, many issues emerged. Mill pondered protecting the rights of the minority is the emerging era of electoral participation; the conservative party soon extended suffrage to the most well paid of workers. As electoral campaigns and political parties grew to appeal to more than the earning public, the Third Reform Bill gave the right to vote to all adult males. Though the state integrated urban masses politically and socially, the conflicting nationalisms espoused by the Catholics and Protestants in Ireland proved to break the prosperity and power that the new political system and suffrage had given the people of Britain. Britain's responsive national state, by granting suffrage and appealing to the people with relative ease, was bound to solely itself and its people and trapped in a backdrop of fierce nationalism. The Irish served only as proof that governments could not elicit greater loyalty unless they could capture and control that elemental current of national feeling. The era of the responsive national state spurred the modern political divisions we have today- our political world would be entirely different without it. While it certainly had its downfalls, they were perhaps impossible to entirely avoid, and encountering varieties of the negative effects of the multiparty system has, perhaps, taught us in some ways how to work toward a greater unification and satisfaction of the people in today's world. ...read more.