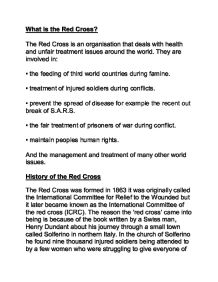 What is the Red Cross?

What is the Red Cross? The Red Cross is an organisation that deals with health and unfair treatment issues around the world. They are involved in: � the feeding of third world countries during famine. � treatment of injured soldiers during conflicts. � prevent the spread of disease for example the recent out break of S.A.R.S. � the fair treatment of prisoners of war during conflict. � maintain peoples human rights. And the management and treatment of many other world issues. History of the Red Cross The Red Cross was formed in 1863 it was originally called the International Committee for Relief to the Wounded but it later became known as the International Committee of the red cross (ICRC). The reason the 'red cross' came into being is because of the book written by a Swiss man, Henry Dundant about his journey through a small town called Solferino in northern Italy. ...read more.

The Red Cross had five original council members they were Henry Dundant, General Guillaume-Henri Dufour, Dr Louis Appia, Gustave Moynie and Dr Th�odore Maunoir. Their very first meeting was on the 7th of February 1863.They were very effective because soldiers and politicians valued their opinions on matters of health and welfare. To make the nurses and doctors who did work for the red cross neutral and noticeable so they were not caught in cross fire while attempting to treat the injured they had upon themselves a red cross, a sign to show that they were not involved in the fighting. Throughout the mid to late 1860's there were several conflicts in Europe in particular. During this period the ICRC was the main driving force behind the development of international humanitarian law. To cap it all on 22nd of August delegates from 16 nations met and signed the Geneva Convention. ...read more.

The Second World War The Second World War took place between 1939 and 1945. During this time the Red Cross fulfilled their role as the doctors of the war well. However their contact with the POW camps and concentration camps was virtually non-existent. The ICRC was very active in Japan during WWII they made contact with POW camps and attempted to assist with the medical treatment of the Hiroshima and Nagasaki bombings. Post Second World War During the rebuilding of the world after world war two the ICRC helped to reunite POWs and their families. They changed their rules regarding civilians during conflicts. They also sorted out the 1948 Israeli- conflict. Red cross nurses and doctors have been seen in the Falklands war, the Iraq war, the gulf war and in giving aid to countries like Ethiopia. Today the International Committee of the Red Cross is as much involved in current affairs as it was in 1863. ...read more.