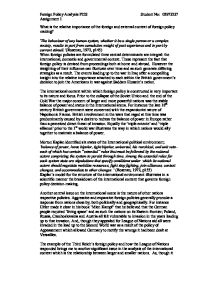 What is the relative importance of the foreign and external context of foreign policy making?

What is the relative importance of the foreign and external context of foreign policy making? 'The behaviour of any human system, whether it be a single person or a complex society, results in part from cumulative weight of past experience and in part by current stimuli.'(Rosenau, 1972, p145) When foreign policies are formulated three central determinants are integral: the international, domestic and governmental context. These represent the fact that foreign policy is devised from proceedings both at home and abroad. However the weighting of their influence can fluctuate over time and as such generate differing strategies as a result. The events leading up to the war in Iraq offer a compelling insight into the relative importance attached to each within the British government's decision to join the Americans in war against Saddam Hussein's nation. The international context within which foreign policy is constructed is very important to its nature and focus. Prior to the collapse of the Soviet Union and the end of the Cold War the major concern of larger and more powerful nations was the stable balance of power and status in the International arena. For instance the late 18th century British government were concerned with the expansionist nature of Napoleonic France. British involvement in the wars that raged at this time was predominantly caused by a desire to redress the balance of power in Europe rather than a perceived direct threat of invasion. ...read more.

National identity, culture and public psyche also help shape foreign policy. This was evident during the build up to the recent war in Iraq. Large scale, vocal protests of mistrust and opposition to the war and anti-American sentiment was rife in Europe, both France and Germany were against military action. The German public are, due to their horrific military past, a relatively passive nation and I believe this was reflected in their misgivings over the war in Iraq, however many observers at the time believed the French opposition was not due to this but resentment against American domination and British pro-American stance rather than being seen as European allies. Whatever the truth behind the opposition it was certainly evident on the streets of Europe especially. However such anti-war and anti-American sentiment was also felt in Britain and large demonstrations typified this. However pole after pole on the publics feelings on the war were divided some in support and some against. The media coverage too was plainly split between scepticism and support, Channel 4 news coverage especially appeared focused on the anti-war sentiment. It was a good illustration of the influence of domestic context in the shaping of foreign policy: public opinion is reactionary and as such the policy is generally already formed before it becomes an issue. Though governments might act upon the tradition or culture international incidents require action by governments quicker even than the media can beam them into our living rooms. ...read more.

Cultural and traditional national opinion is just as influential in the short to medium term, as witnessed by the German anti-war stance over Iraq. Plainly it was a more significant cause for the decision than the one its ally, the US perceived. However this individual stance against American wishes contrasts with the path in which the German foreign policy followed during the Cold War and encapsulates just how a change in international context can affect foreign policies of nations further down the international corridors of power. The International context is generally regular in the short and medium terms though historic events such as the collapse of the USSR or the World Trade Centre terrorist attacks profoundly amend its course. It is also clear that smaller nations who rely on more powerful allies such as the US compound their foreign policies in order to secure their help when required. However having looked at the major international incidents of the 20th century I feel that much depends on the governments which implement the foreign policies and their leaders also and its influence on the international and domestic contexts. Had the likes of Hitler, Stalin, Chamberlain, Churchill, Khrushchev, Kennedy, Thatcher, Hussein, Bush, Blair and everyone else acted differently when shaping their respective foreign policies then both contexts would be very different today. By way of conclusion then I believe that the contexts are inextricably linked and though one may temporarily take precedence over the others the causality that created it or it creates will effect and be affected by all. ...read more.