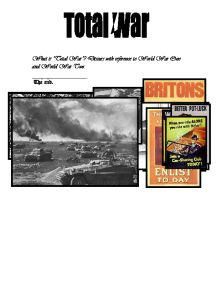 What is &quot;Total War&quot;? Discuss with reference to World War One and World War Two.

What is "Total War"? Discuss with reference to World War One and World War Two. First of all, what is "Total War"? What do we mean by it and what answer do we expect from this question? Total War is the war that affects all of society- not just armed forces, and that uses all the resources available to be able to win it. It's "the mobilization of the whole society and its resources for the war effort." In most of the countries the first Total War was the First World War. World War One started a completely new generation of wars. Before 1914 wars only affected the army and had no change on the lives of ordinary people. At earlier times small professional armies fought the wars, which means that all the men were especially trained for fighting. Well, those two wars- World War One and World War Two were different. Everyone fought them and everyone provided as much help as possible, it didn't matter whether the person was skilled or unskilled, old or young, male or female. In this essay I will also investigate why were World War One and World War Two called Total Wars. The first thing that comes to mind is the scale of war. It was tremendous. I am going to start from speaking about World War One and then later on about World War Two. World War One was a completely new style of wars, the changes were unbelievable, in fact the historians even see the World War One as "the dividing line between modern and contemporary history". ...read more.

To keep the production going WOMEN for the first time ever introduced to the men jobs. It was something like a revolution. There was a new style of propaganda asking women to work in industries and help to win the war. New groups were organized like: "the order of the white feather", "mother's union", "women's hospital corps", "women's police volunteers", "woman's land army" and many more. Women volunteered to work as nurses, to cook, farm workers etc. By the end of the war half a million women had replaced men in the office jobs, and almost 800,000 had taken up work in engineering industries. In fact very soon people realized that with very little training women were as skilled as men. The amount of food became a problem in the countries; there was not enough of it. As the supplies were running short, the prices kept rising. Poor people couldn't afford to buy enough food, while the rich were buying too much. Soon there were laws made that controlled the prices of bread. In May 1917 volunteering rationing was introduced, but it didn't help much, so in 1918 compulsory food rationing was introduced. If someone would break the rationing rules he would get penalties. It was also the first time during the war that people were not told the whole truth, the government was controlling what the public knew. They were only telling the good news. ...read more.

If Germany would make it in the beginning of the war, it is most certain that it would win the war. And as I mentioned previously the most horrific weapon ever was THE ATOMIC BOMB. It was used in Nagasaki and Hiroshima, the effects were disastrous! In Hiroshima at least 75,000 people died instantly. Tens of thousands more died from radiation poisons in the years that followed. This war mostly concentrated on the civilians because the government believed that this would lower people's morale and they would stop supporting the government in their countries, which would make it much easier to win the war. The civilians became a target. Those two wars saw casualties on an unprecedented scale. In World War One the best estimate in a global total of 8,500,000 killed and 57,470,000 injured. However the casualties of World War Two were much more horrific, altogether about 55 million died, abut 40 million were the Soviet and about 30 million Chinese. There were lots of refugees. Some cities and villages were totally destroyed, especially in Russia. Much much more civilians died than soldiers. This never happened before. As we can see from all the above information on both of the wars, we can definitely say that World War One and World War Two were Total Wars. Each level of society and almost every country were affected. They were the first Total Wars as nothing of this kind ever happened before the effects were horrific and the memories of those wars will always stay in people's hearts. The end. Done by Ioulia Samouilovskaia. ...read more.