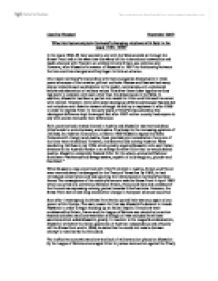 Caroline Howard November 2005 What key factors explain Germany's changing relations with Italy in the years 1933-1939? In the years 1933-35 Italy wanted to ally with the West and did so through the Streser Front and at the same time Germany left the international community and made alliances with Poland in an attempt to keep Britain as a potential ally. However, after Mussolini's invasion of Abyssinia in 1937 the relationship between the two countries changed and they began to form an alliance. One reason Germany's relationship with Italy changed so dramatically in these years is because of their similar political outlooks. Nazism and Fascism had many similar elements such as obedience to the leader, nationalism, anti-communist beliefs and admiration of military values. This drew them closer together as they had more in common with each other than the democracies in the West. In addition, Mussolini had been a partial role model for Hitler and followed his career with interest. However, there were some ideological differences because Fascism did not include an anti-Semitic element although he did try to implement it after 1938 in order to impress Hitler. In the early years of Hitler's Chancellorship this ideological difference kept them apart but after 1937 neither country had anyone to ally with and so overcame their differences. ...read more.

The ineffective economic sanctions and lack of military action placed on Mussolini by the League of Nations encouraged Hitler to pursue more action against the Treaty of Versailles. Consequently, he defied the Treaty and remilitarised the Rhineland in March 1936. Following these incidents, Germany and Italy began to move closer together as both were now left without allies. It was during the Abyssinian crisis that a formal alliance, known as the Rome-Berlin Axis occurred. Hitler sacrificed the ex-Austrian territories in Northern Italy for the chance of a formal alliance between Germany and Italy. This reassured Mussolini and he knew he had to move closer to Germany because he was aware he needed an ally and this allowed him to back Hitler's plan to unite with Austria. This was the first formal alliance between the two countries. Not long after the Rome-Berlin Axis was signed, the Spanish Civil War broke out. Both Hitler and Mussolini supported the fascist, Franco which brought the two countries closer together. Both Mussolini and Hitler had similar reasons for sending help to Franco, including aiming to increase their influence in Spain. The success of Franco meant that there was now a third fascist leader in Europe who also had influence over the Mediterranean Sea. ...read more.

Following this visit, Mussolini adopted the German goosestep and introduced anti-Semitic legislation eventhough it lost him fascist support. Once he had strengthened the alliance with Italy, Hitler put pressure on Czechoslovakia to hand over the Sudetenland which Mussolini was very much involved with. In spring 1939, both countries began pursuing aggressive foreign policies in the East with Germany invading Czechoslovakia and Italy invading Albania in April. The invasion of Albania forced Italy further away from Britain and France and closer to Germany. Germany and Italy were now ready for a military alliance; the Pact of Steel was agreed in May 1939. This was essentially an aggressive treaty although it did include mutual defence clauses. Mussolini believed there was no need for a defensive treaty as it was unlikely that either of the Axis powers would be attacked. Hitler hoped the treaty would reduce the resolve of Britain and France to defend Poland if it was attacked. The Pact of Steel allowed Hitler to "attack Poland and to plunge into the Second World War" (Wiskemann). The main factors drew Italy and Germany into a military alliance by 1939 from being hostile towards each other in 1933 were shared ideological beliefs and lack of other powers to ally with. Hitler was able to manipulate Mussolini into a military alliance which enabled him to pursue his aggressive foreign policy. ...read more.