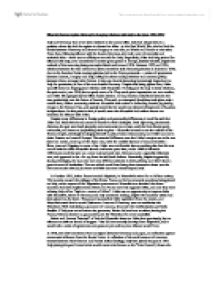 What key factors explain Germany's changing relations with Italy in the years 1933-1939? Italy and Germany had never been destined to be natural allies. Italy had always been in a position where she had the option to choose her allies - in the First World War, she had had the choice between Germany and Austro-Hungary on one side, or Britain and France on the other. Even then, following alliance with the Austro-Germans, she took a year of neutrality and switched sides - there was no affinity to one side for Italy. Regardless, Hitler had long strived for alliance with Italy, as he considered it another great power in Europe, besides himself, despite the outlook of this occurring being somewhat bleak until around 1936. Between 1933 and 1936, relations between the two nations had been somewhat stale. Mounting tension in Austria in 1934, due to the Austrian Nazis causing agitation, led to the Rome protocols - a series of agreements between Austria, Hungary and Italy, calling for closer trading relations and common policy between them, amongst other factors. It also saw Austria becoming increasingly dependant on Italy for protection, in fear of the ever-hostile Germany. Despite this being against him, Hitler was still intent on forging good relations with Mussolini. ...read more.

not naturally develop from Abyssinia, and it would take a series of agreements and pressure yet until any true alliance would form. In 1936, the Anti-Comintern Pact was signed between Germany and Japan, as unification against communist influence from the Soviet Union. In reflection of the small amount of common interest between Nazi German and Fascist Italian ideology, Italy later joined the pact in 1937. Italy joining the pact formed what would come to be known as the "Axis Powers"; those who opposed the western allies in the Second World War. Another factor which brought Italy and Germany closer together around this time was the outbreak of the Spanish civil war. Under request of the Spanish government, Germany joined the war and supported General Franco's rebellion. Hitler's reasoning and argument for this action was that he wanted to save Europe from "communist barbarianism". Aside from this, Italy was also supporting Franco, leaving Hitler with the hope that a Nationalist victory would bring himself and Mussolini closer. Thankfully for Hitler, his hope became reality, and he did benefit from closer ties with Mussolini. However, there was still no real alliance between the two, and Mussolini was reluctant to forge one - he could still turn back to Britain and France. ...read more.

Yet, perhaps still, the fear of fighting against Germany and the prospects of Mediterranean expansion would have drawn him towards Hitler instead - after all, he did believe the western allies to be weak in comparison. The supposed political affinity between the two nations bared no benefits to their relations, as despite their few similarities, Italy and Germany were quite ideologically different. Many may say that Mussolini's invasion of Abyssinia was the key factor in determining the relationship between the two, but had it not been for Hitler's persistence following this, little would have come of the situation. Closer they may have been, but until a solid alliance was formed in the shape of the Pact of Steel, Mussolini and Hitler were not particularly close, only sharing a small amount of common interest. Should the two nations ever have really become allies? Their expansionist aims may have complimented one another, but Hitler was not one to be trusted. Had Mussolini chosen to ally with Britain and France, would the consequences of Hitler's endless striving been any less severe on Europe? Hitler may have been less confident in going about his aims, but it is likely they would have still taken place - as much as he strived for alliance with Mussolini, a lack of it would be unlikely to stop him. ...read more.