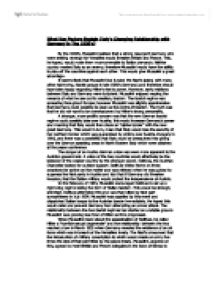 What Key Factors Explain Italy's Changing Relationship with Germany in The 1930's? By the 1920's, Mussolini realised that a strong resurgent Germany who were seeking revenge for Versailles would threaten Britain and France. This, he hoped, would make them more amenable to Italian demands. Neither country wanted Italy as an enemy; therefore Mussolini would have the ability to play off the countries against each other. This would give Mussolini a great advantage. It seems likely that Mussolini had funded the Nazi's (along with many other right-wing, fascist groups in late 1920's Germany) and therefore should have been happy regarding Hitler's rise to power. However, early relations between Italy and Germany were turbulent. Mussolini enjoyed reaping the rewards of what he saw as his creation, fascism. The fascist regime was spreading throughout Europe; however Mussolini was slightly apprehensive that Germany could possibly be seen as the centre of fascism. The truth was that he did not want to be overshadowed by Hitler's strong personality. A stronger, more prolific concern was that the new German fascist regime could possibly take over Austria; this would increase Germany's power and meaning that Italy would then share an "alpine border" with the new great Germany. This would in turn, mean that Italy would lose the security of her northern border which was guaranteed by victory over Austria-Hungary in 1918, and there was a possibility that Italy could be pressurised into giving over the German speaking areas in North Eastern Italy which were obtained at the peace conference. ...read more.

Mussolini, ever pragmatic realised this and was able to use it to his own advantage. The "Stresa Front" gave him added protection and it also indicated to him that the western powers were eager to avoid Germany allying with other states to seek revenge against the revision of the peace settlement (especially due to specific clauses such as the payment of reparations and limited military and arms). Mussolini was convinced that a German-Italian alliance would horrify alarm Britain and France. To avoid this prospect, he hoped that they might show sympathy towards Italian ambitions and thus, be more tolerant towards Italian 'adventures' overseas. Mussolini realised that this was an ideal opportunity to attempt expansion of his colonial empire with minimal risk. His chosen target was Ethiopia. Britain and France, although not certain of Mussolini's attack, stayed faithful to the "Stresa Front" and did not speak up against his invasion of Ethiopia. Both countries were too scared to risk having Italy as an enemy. Mussolini suddenly began to look upon German fascism with more favour. He saw it as another vibrant fascist regime, one which also had grievances with Britain and France. Mussolini realised that Italian friendship, alongside the prospect of military alliance with Nazi Germany, would terrify both Britain and France. He was aware it might grant him the power to manipulate Britain and France, although he was unsure of how he would go about this exactly. ...read more.

The British Prime-Minister, Neville Chamberlain, asked Mussolini to act as a mediator at a conference which had been called to suggest a diplomatic solution to the crisis. The Sudetenland was soon handed over to the third Reich. Mussolini was seen as an "architect of the peace", but this view had only confirmed the weakness of both Britain and France. In the November of 1938, the Italian parliament was recalled and Mussolini instructed it to demand the annexation of Nice, Corsica and Tunis from France. At last, Mussolini was beginning to clarify the vague expansionist ideas he had held for well over a decade. By 1938, France was rearming and the French were outraged by the Italian demands. The Duce was aware that to realise his ambitions, war was inevitable. He believed (and hoped) that he could win a war against France. He believed Britain would keep out of any conflict and in February 1939, the duce presented a candid analysis of his foreign policy aims and made it clear he was prepared for confrontation, even with Britain if need be. While preparations were going ahead for the invasion of Albania, Mussolini received a shock from his German friends. German troops had invaded Czechoslovakia in March 1939. He was furious and once again, contemplated changing sides. Once again, his thoughts of this lasted for a short period. Real fear of Germany was now added to the admiration of her success. Mussolini felt it was better to be friends with a dynamic regime rather than pick up the losses of Germany's victory. ...read more.