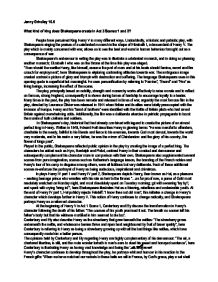 What kind of king does Shakespeare create in Act 3 Scenes 1 and 2? King Henry V.

Jenny Grindley 10.6 What kind of king does Shakespeare create in Act 3 Scenes 1 and 2? People have perceived King Henry V in many different ways. Undoubtedly, a historic and patriotic play, with Shakespeare singing the praises of a celebrated monarch in the shape of Elizabeth I, a descendent of Henry V. The play which is mainly concerned with war, allows us to see the best and worst in human behaviour brought out as a consequence of war. Shakespeare's endeavour in writing the play was to illustrate a celebrated monarch, and in doing so pleasing another monarch; Elizabeth I who was on the throne at the time this play was staged. "Then should the warlike Henry, like himself, assume the port of mars and at his heels should famine, sword and fire crouch for employment", here Shakespeare is exploring contrasting attitudes towards war. The ambiguous image created contrast a picture of glory and triumph with destruction and suffering. The language Shakespeare uses in this opening quote is superficial but meaningful. He uses personification by referring to "Famine", "Sword" and "Fire" as living beings, increasing the effect of the scene. The play, principally based on nobility, strength and monarchy works effectively to raise morale and to reflect on famous, strong England, consequently it is shown during tomes of hardship to encourage loyalty to a leader. Many times in the past, the play has been remade and released in times of war, arguably the most famous film in the play, directed by Laurence Olivier was released in 1944 when Britain and its allies were totally preoccupied with the invasion of Europe. Henry and his "band of brothers" were identified with the Battle of Britain pilots who had saved Britain against overwhelming odds. Additionally, the film was a deliberate exercise in patriotic propaganda to boost the morale of both civilians and soldiers. In Shakespeare's day, historical fact had already combined with legend to create the picture of an almost perfect king in Henry. ...read more.

Shakespeare uses a simile towards the end of Henry's speech in order to demonstrate the overall high spirits of the army; "I see you stand like greyhounds in the slips, straining upon the start," here Henry is referring to his men as being desperate to fight, almost holding back like greyhounds at the start of a race. The impression of a composed, reliant and bold king, assured both of his own ability and the ability of his men is created by Shakespeare near the end of Henry's speech. Shakespeare uses the image of the war as being like a game; "The game's afoot," this metaphor of the war being a game intensifies the adrenaline, anticipation and excitement of beginning the war. "Follow your spirit and upon this charge," Henry is telling his soldiers to follow what is inside of them. Shakespeare creates the effect of Henry as being rousing and motivating towards his troops. The concluding line in Henry's speech: "Cry 'God for Harry, England and Saint George'" emphasises the ploy that his men are fighting for England, they are fighting for the patron Saint George who slayed the dragon - they should slay the French. With the last line Shakespeare is creating a king who is highly patriotic and nationalistic. In its entirety Henry's speech is written and spoken in verse, which reflects the nobility and the eloquence of Henry, opposite from his old character as Hal. In his speech, Henry unifies his men for his cause and is able to incite and stimulate his men. In the scene, Shakespeare uses techniques of poetry to celebrate and glorify war. Shakespeare particularly stylises Henry to invoke images and metaphors from nature - wild animals like the tiger, and of natural forces like the weather in order to provoke his men to shift into a state of almost unrestrained brutality for war. Shakespeare portrays Henry with great rhetorical skills and tactically inspirational. ...read more.

Shakespeare creates a king with two main sides to his character. Henry is often portrayed as strong and noble with a fantastic ability to rouse and inspire his troops in the prospect of war. Henry is successfully able to give definitions of nationality, patriotism and nobility in order to rouse and antagonise his troops to do their best against France. Shakespeare also illustrates Henry as a private and burdened man. When he is on his own, Henry ponders on the burden of being a king and the responsibility of having the dependence of a nation on your shoulders. Although Shakespeare portrays Henry as self-pitying and anxious of the opinions of others, this character is only seen when Henry is in private which is a credit of his ability to remain strong and noble in front of his men in order to encourage and raise their spirits. The language which Shakespeare uses such as metaphors, figuratives, similes and personification is effective to the genre of specific scenes. In scenes were Henry's character is noble and majestic he speaks in verse in order to increase the impressions of a noble king. Other character's speeches are non poetic and are not spoken in verse which reflects on their lack on nobility. The effective language Shakespeare uses adds to the overall effect of the play being about a celebrated monarch. Overall, Shakespeare portrays the image of a king in Henry who is noble, patriotic and majestic. Henry's ability to inspire and incite his troops as well as being able to mitigate certain situations whilst taking an egalitarian stance is what makes Henry such a successful king. The portrayal of Henry's human side by Shakespeare where we see Henry as being insecure and burdened allows the audience to see a different side to Henry's character and makes his demeanour in front of his troops even more remarkable. In Conclusion, Shakespeare portrays Henry as a noble and majestic King, who is able to adjust his demeanour and stance in different situations in order to achieve the desired response from his men. ...read more.