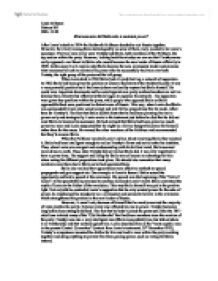 What measures did Stalin take to maintain power?

What measures did Stalin take to maintain power? After Lenin's death in 1924 the Bolshevik Politburo decided to rule Russia together. However, the rivalry among them started quickly as some of them, truly, wanted to be Lenin's successor. The two main rivals were Trotsky and Stalin, both members of the Politburo, the top section within the party. However, looking back from today we can see that Trotsky never really opposed a real threat to Stalin who would become the new leader of Russia officially in 1929. In this essay I will explain why Stalin became the new communist leader and examine what measures ho took to maintain his power after he successfully had won over both Trotsky, the right group of the party and the left group. When Lenin died in 1924 Stalin had all ready built up a network of supporters. In 1922 Stalin had been given the position as General Secretary of the Bolshevik party. It was a very powerful position but it had merely been realised by anyone but Stalin himself. He could view important documents and he could appoint new party workers/members as well as dismiss them. Silently but effectively Stalin began to organise his network - his supporters were given key positions within the party, while people who opposed Stalin or Stalin opposed/disliked were positioned in distant areas of Russia. ...read more.

The fact that he hadn't joined the party until after the 1917 rebellions irritated many of the "Old-Bolsheviks" that had been members since the creation of the party. Trotsky was also a very intelligent man (Stalin was probably too, but did not show it as Trotsky did) and that worked against him. Lenin described him as the "most capable man in the present Central Committee" (extract from Lenin's testament, 25th December 1922). Trotsky's competence mounted the dislike for him and lead to men within the party working together and doing anything to prevent him from gaining power, such as voting for Stalin instead. However, Stalin strategically betrayed all these men that he had co-operated with. The right - Bukharin, Rykov and Tomsky, and the left - Trotsky, Kamenev and Zinoview. They were all removed at an early stage in Stalin's USSR. He used his position as General Secretary to dismiss them from the party or to reposition them. Stalin had also introduced a system of threat of expulsion. Workers within the party had to have Party cards. If you lost your party card you could not participate in any Bolshevik activities and you could not get food stamps, jobs or housing etc. When somebody in the party was to be removed he would be asked for his card. ...read more.

Stalin also introduced a new constitution in 1936 that would appear to be more democratic by allowing voting by secret ballot. Everyone in Russia could vote for members to the national assembly, the Supreme Soviet. However, the Supreme Soviet did not have much power. It elected ministers to the Praesidium to act on its behalf and Stalin was also the secretary of it, thus he controlled the Praesidium too but at the same time it looked as if he had introduced a more democratic system. Education was also controlled by the state. Literacy increased but indoctrination at the schools were carried out, raising a generation to look up to their leader, Stalin and the Father of the revolution Lenin. Slowly Russia was more and more controlled by the Bolsheviks and Stalin. He had control over his own party by eliminating eventual threats. He controlled the entire nation by propaganda and illusions. The illusion of a more democratic system was in fact only one more thing for Stalin to control. The free education was in fact only a school of indoctrination where the children were taught what Stalin decided. The many purges on Stalin's orders created fear and suspicion among the Russians. This way did Stalin have control over the people not only physically (education etc.) but also psychologically. People were constantly frightened that they would be next, or their son etc. This way they were probably more likely to stress their obedience to Stalin. Linda Eriksson History IB1 2003-11-28 ...read more.