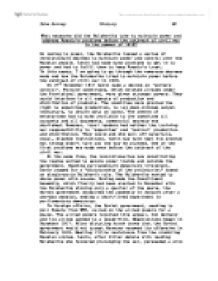 What measures did the Bolsheviks take to maintain power and address Russia's problems before the outbreak of civil war in the summer of 1918?

What measures did the Bolsheviks take to maintain power and address Russia's problems before the outbreak of civil war in the summer of 1918? On coming to power, the Bolsheviks issued a series of revolutionary decrees to maintain power and control over the Russian people. Lenin had made many promises to get in to power and had to fulfil them to keep Russia's trust. In this essay, I am going to go through the numerous decrees made and how the Bolsheviks tried to maintain power before the outbreak of civil war in 1918. On 27th November 1917 Lenin made a decree on 'workers control'. Factory committees, which existed already under the Provisional government, were given stronger powers. They could interfere in all aspects of production and distribution of products. ...read more.

In foreign affairs, the Soviet government, seeking to pull Russia from WWI, called on the allied powers for a peace. The allied powers rejected this appeal, but Germany and its allies agreed to a cease-fire. Negotiations began in December 1917. After dictating harsh terms that the Soviet government would not accept Germany resumed its offensive in February 1918. Meeting little resistance from the crumbling Russian armies. Lenin, after bitter debate with leading Bolsheviks who favoured prolonging the war, persuaded a slim majority of the Bolshevik Central Committee that peace must be made at any cost. Russia had nothing to gain by prolongation On March 3, Soviet government officials signed the Treaty of Brest-Litovsk, giving Poland, the Baltic lands, Finland, and Ukraine to German control and giving up a portion of the Caucasus region to Turkey. ...read more.

The Soviet leadership became convinced that there was a wide ranging conspiracy of foreign enemies and counter-revolutionaries. Therefore they poured resources into the intelligence service to combat this conspiracy. The Cheka quickly succeeded in destroying any remaining counter revolutionary groups. Also, the Cheka played a significant role in destroying criminal gangs too. The Soviet Government found Russian money, the ruble, falling in value on the world currency market, and, rather than adopt the anarchist dream of abolishing money, the Bolsheviks responded by nationalizing all banking institutions. In February 1918, all shareholders in banks were expropriated for the Bolsheviks, and all foreign debts denied. Problems were emerging for the Bolsheviks and although some of the measures taken to maintain power were successful most were not. Civil war was approaching and something had to be done quickly to address the problems created. ?? ?? ?? ?? John Garvey History GC ...read more.