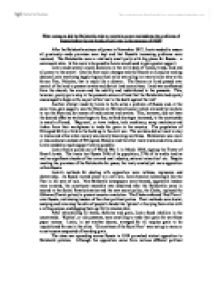 What measures did the Bolsheviks take to maintain power and address the problems of Russia before the out-break of civil war in the summer of 1918?

What measures did the Bolsheviks take to maintain power and address the problems of Russia before the out-break of civil war in the summer of 1918? After the Bolsheviks seizure of power in November 1917, Lenin needed to ensure all previously made promises were kept and that Russia's increasing problems were resolved. The Bolsheviks were a relatively small party with big plans for Russia - a communist state. Is this were to be possible Lenin would need to gain greater support. Lenin made several crucial decisions in the early days of 'peace, bread, land and all power to the soviet'. One his first major changes was the Decree on Land, by making decrees Lenin was being hugely hypocritical as he was ruling in a very similar way to the former Tsar, Nicholas, that is much like a dictator. ...read more.

'Bag-men', or town traders, took machinery, scrap machinery and timber from their workplaces to trade for grain in the country. The population of Petrograd fell by a third in the build up to the civil war. The workers did not want to stay in towns and cities when money was slowly becoming worthless. Bolshevism was more or less unknown outside of Petrograd, Moscow and the other main towns and cities, ad so Lenin needed as much support here as possible. Lenin finally pulled out of World War 1 in March 1918, signing the Treaty of Brest-Litovsk. The treaty lost Russia 26% of its population, 27% of its arable land as well as significant chunks of the iron and coal industry, national minorities' etc. ...read more.

After nationalising all banks, factories and grain, Lenin faced rebellion in the countryside. 'Kulaks', or rich peasants, were unwilling to trade their grain for worthless paper money. Lenin, in yet another decree, arranged for all surplus grain to be requisitioned for use in the cities. 'Committees of the Rural Poor' were set up to name or arrest anyone suspected of hoarding grain. The class war spreading across Russia in 1918 provoked violent opposition to Bolshevik policies. Although the opposition came from various different political parties, former allies, national minorities, supporters of the Tsar, Generals and land and factory owners, they all shared a common goal, abolition of Bolshevism. Civil war became inevitable; despite Lenin's best efforts and Russia finally fell into what would become one of the most bitterly contested of all twentieth century wars. ?? ?? ?? ?? ...read more.