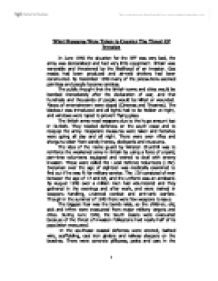 What Measures Were Taken to Counter The Threat Of Invasion

What Measures Were Taken to Counter The Threat Of Invasion In June 1940 the situation for the BEF was very bad, the army was demoralised and had very little equipment. Britain was venerable and threatened by the likelihood of an invasion. Gas masks had been produced and air-raid shelters had been constructed. By December 1940 many of the precautions seemed pointless and people became careless. The public thought that the British towns and cities would be bombed immediately after the declaration of war, and that hundreds and thousands of people would be killed or wounded. Places of entertainment were closed (Cinemas and Theatres). The blackout was introduced and all lights had to be hidden at night, and windows were taped to prevent flying glass. The British army need weapons due to the huge amount lost in Dunkirk. ...read more.

These were called the Local Defence Volunteers (LDV). Everyman over the age of eighteen was medically examined to find out if he was fit for military service. The LDV consisted of men between the age of 17 and 65, and the uniform was an armband. By August 1940 over a million men had volunteered and they gathered in the evenings and after work, and were trained in weapons handling, unarmed combat and anti-tank warfare. Though in the summer of 1940 there were few weapons to issue. The biggest fear was the bomb raids, so the children, old, sick and infirm were evacuated from major military targets and cities. During June 1940, the South coasts were evacuated because of the threat of invasion Folkestone had nearly half of its population evacuated. ...read more.

Hitler called of operation Sealion because he knew that focusing his entire war effort on Britain would seriously delay his invasion of Russia. Russia was both his primary goal, and his most powerful enemy. Britain in 1940, and in 1941 when Hitler invaded Russia, was incapable of significant action against Germany. It had been pushed out of Europe, lost much of its army, its air force was capable of only limited bombing raids against Germany, and it was fighting to retain its possessions in North Africa. There were more practical reasons that the Germans lacked such as being able to transport a sufficient invasion force to the target, air superiority and time in the air was short. Britain attempt to protect itself from invasion was very good, but not particularly effective in the sense that all the precautions were not needed and as time past, were ignored. Rob Bennett ?? ?? ?? ?? 1 ...read more.