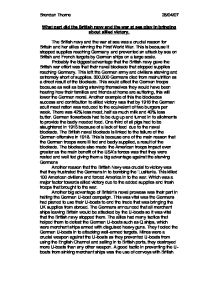 What part did the British navy and the war at sea play in bringing about allied victory.

What part did the British navy and the war at sea play in bringing about allied victory. The British navy and the war at sea was a crucial reason for Britain and her allies winning the First World War. This is because it stopped supplies reaching Germany and prevented an attack by sea on British and French targets by German ships on a large scale. Probably the biggest advantage that the British navy gave the British war effort was that their naval blockade that stopped supplies reaching Germany. This left the German army and civilians starving and extremely short of supplies. 300,000 Germans died from malnutrition as a direct result of the blockade. This would affect the German troops because as well as being starving themselves they would have been hearing how their families and friends at home are suffering, this will lower the German moral. Another example of this the blockades success and contribution to allied victory was that by 1916 the German adult meat ration was reduced to the equivalent of two burgers per week. ...read more.

The allies had many tactics that helped them to defeat the German U-boats such as Q ships, which were merchant ships armed with disguised heavy guns. They fooled the German U-boats in to attacking well-armed targets. Mines were a crucial weapon against the U-boats as they prevented U-boats from using the English Channel and sailing in to British ports, they destroyed more U-boats than any other weapon. A good tactic in preventing the U-boats from sinking merchant ships was the use of convoys with British and US war ships escorting the merchant ships. This reduced the losses of allied shipping by 20 per cent. These convoys were protected by Long-range aircraft, which by the end of the war could protect the convoys and give advanced warnings of any U-boat attacks. These tactics were very effective and by 1917 the British and Americans were producing so many ships that the Germans halted their U-boat campaign. There were a few battles at sea such as in Heligotand where the British scored a clever tactical victory in the North Sea. ...read more.

This lack of major sea battles meant that relatively few deaths were inflicted as a result of the British Navy. Also the British Navy's blockade was not totally effective as supplies could still reach Germany over land. The entry of America can also not be claimed as a direct result of the Navy as their were many factors that contributed to Americas entry, such as Germanys attempt to ally with Mexico and the fact that the Americans were already supplying weapons and loans to the allied nations. Also the sinking of the 'Lusitania' happened in 1915 but the USA did not declare war until April 1917 two years later. So in conclusion the British Navy and the war at sea played a crucial part in bringing about allied victory. The main reason for this was the fact that they managed to blockade the German Supply routes meaning that the German people and the troops were poorly fed and under supplied. It also led the Germans in to a tactic of unrestricted submarine warfare, which led to the sinking of an American passenger ship bringing the USA in to the war. Brendan Thorne 28/04/07 ...read more.