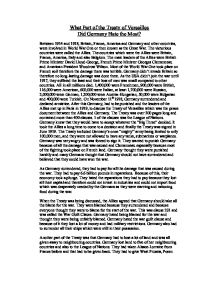 What Part of the Treaty of Versailles Did Germany Hate the Most?

What Part of the Treaty of Versailles Did Germany Hate the Most? Between 1914 and 1918, Britain, France, America and Germany and other countries, were involved in World War One or then known as the Great War. The victorious countries were called the Allies. The countries which were the Allies were Britain, France, America, Italy and also Belgium. The main leaders of the Allies were British Prime Minister David Lloyd-George, French Prime Minister Georges Clemenceau and American President Woodrow Wilson. Most of the World War One took place on French soil therefore the damage there was terrible. Germany didn't invade Britain so therefore no long-lasting damage was done there. As the USA didn't join the war until 1917, they suffered the least and their loss of men was small compared to other countries. All in all millions died. 1,400,000 were Frenchmen, 900,000 were British, 116,000 were American, 600,000 were Italian, at least 1,700,000 were Russian, 2,000,000 were German, 1,200,000 were Austria-Hungarian, 50,000 were Bulgarian and 400,000 were Turkish. ...read more.

Germany thought they were punished harshly and many Germans thought that Germany should not have surrendered and believed that they could have won the war. As Germany surrendered, they had to pay for all the damage that was caused during the war. They had to pay 6.6 billion pounds in reparations. Because of this, their economy took a plunge. They hated the reparations they had to pay because they lost all their capital and therefore could not invest in industries and could not import food which was desperately needed by the Germans as they were starving and rationing food during the war. When the Treaty was being discussed, the Allies agreed that Germany should take all the blame for the war. They were blamed because they surrendered and because everyone thought they were to blame for the start of the war. This was clause 231 and was called the War Guilt Clause. Germany hated being blamed for the war and thought they were being unfairly blamed. ...read more.

Germany was forbidden to unite with Austria to become a single German-speaking country because if they did unite, then they would have been strong enough to go to war. Germany hated the fact that they had to give away all the land mentioned and didn't like giving it all away. In the end Germany had lost 13% of their land in Europe, 12% of their population, 16% of their coalmines and 48% of their ironworks. All in all, I believe personally that Germany hated the War Guilt Clause the most because it was the reason they had to pay reparations and lose their land. If they hadn't been blamed for the war then they would not have had to pay any reparations, lose any of their land and would not have had to see eye to eye with the other agreements on the Treaty of Versailles. In the end all the leaders were happy with the result and glad they had gained revenge on Germany. Reshma Halai 10WM ...read more.