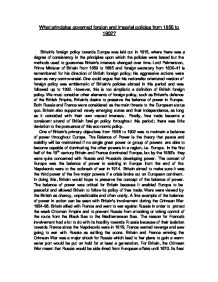 What prinicples governed foreign and imperial policies from 1856-1902?

What principles governed foreign and imperial policies from 1856 to 1902? Britain's foreign policy towards Europe was laid out in 1815, where there was a degree of consistency in the principles upon which the policies were based but the methods used to guarantee Britain's interests changed over time. Lord Palmerston, Prime Minister of Britain from 1859 to 1865 and foreign secretary from 1830-41 is remembered for his direction of British foreign policy; his aggressive actions were seen as very controversial. One could argue that his nationalist orientated version of foreign policy was emblematic of Britain's policies abroad in this period and was followed up to 1902. However, this is too simplistic a definition of British foreign policy. We must consider other elements of foreign policy, such as Britain's defence of the British Empire, Britain's desire to preserve the balance of power in Europe. Both Russia and France were considered as the main threats to the European status quo. Britain also supported newly emerging states and their independence, as long as it coincided with their own vested interests. Finally, free trade became a consistent strand of British foreign policy throughout this period; there was little deviation to the pursuance of this economic policy. One of Britain's primary objectives from 1856 to 1902 was to maintain a balance of power throughout Europe. The Balance of Power is the theory that peace and stability will be maintained if no single great power or group of powers are able to become capable of dominating the other powers in a region, i.e. ...read more.

The balance of power had been compromised with Russia's increasing influence in South Eastern Europe. At this point Disraeli sent Indian troops to Malta and Austria agreed with Britain on demanding a second international conference; this action placed Britain in a state of war readiness. With Britain's threat to go to war, Russia backed down and agreed on withdrawing its support from Bulgaria; Britain was gifted Cyprus by the Sultan of Turkey. Britain's interventions throughout this period led to the preservation of European balance of power. In 1840 Britain shifted towards a free trade policy; this was trade without government intervention, for example tariffs or foreign goods being taxed. Robert Peel had set out against this idea but was won over by Richard Cobden and John Bright's speeches made in parliament. Because Britain was going through an industrial revolution free trade was seen as a sensible move forward. By the 1860's free trade had been achieved in Britain and it began negotiating free trade agreements with European powers via the Cobden-Chevallier treaty. Eventually, Britain could swamp foreign markets with cheaply manufactured goods therefore out-producing other countries and also benefiting British consumers. The binding of countries trading amongst each other was another achievement made through free trade. Obviously free trade between states would encourage a degree of mutual interdependence. This would reduce the probability of warfare. It was also thought that if Britain was the first to follow this concept then others would also change. ...read more.

At times Britain played the role of breaking up territorial boundaries if it believed it would then succeed. An example of this being Britain's involvement in the Belgium revolt in 1830. France invaded Belgium after they broke away from the Netherlands. If France controlled Belgium it had access to the Ostend and Zeebrusse ports. Britain intervened and asked France to keep itself to itself in order to maintain the status quo and balance of power. In 1939 the treaty of London was signed by European powers, this treaty guaranteed Belgium's independence. On a number of occasions, such as the Bulgarian revolt in 1876, Disraeli strategic decision making put Britain's vested interests at stake. Morally, the best thing for Disraeli to do, in this case, was to support Bulgaria as it rebelled against the Ottomans. Britain effectively stayed neutral but quietly approved the Ottomans, who had access to the Straights, in order to say on good terms for Britain's foreign policy. Although the methods used to fulfil the principles proved to be so variable, overall, there was a consistency in British foreign policy from 1846 to 1902. The most important being European peace; this was based on a balance of power. One of the main reasons for this was because a stable Europe enabled the expansion and protection of the British Empire. Also, Russia was perceived as a threat and British governments never adapted this view. Finally, Imperial trade had to be protected and so did the routes that enabled the trades to flourish. ...read more.