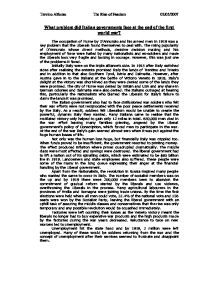 What problem did Italian governments face at the end of the first world war?

What problem did Italian governments face at the end of the first world war? The occupation of Fiume by D'Annunzio and his armed men in 1919 was a key problem that the Liberals found themselves to deal with. The rising popularity of D'Annunzio whose direct methods, decisive decision making and his employment of force were hailed by many nationalists and ex-soldiers and made the Liberals look very fragile and lacking in courage. However, this was just one of the problems it faced. Initially Italy were on the triple alliance's side. In 1915 after Italy switched sides after realising the entente promised Italy the lands of Trentino and Triesto and in addition to that also Southern Tyrol, Istria and Dalmatia. ...read more.

Many Italians came to realise that the mutilated victory only helped to gain only 12 miles in total. 650,000 men died in the war effort leaving many families grieving, angered by the Liberal government's policy of Conscription, which forced men to participate in the war. At the end of the war Italy's gain seemed almost zero when it was put against the huge human losses of life. Not only was the human loss huge, but financially Italy was crippled too. When funds proved to be insufficient, the government resorted to printing money. The effect produced inflation where prices quadrupled dramatically. The middle class were most affected and savings were destroyed. ...read more.

By the time the first elections were held where all men could vote, 32.4% of the national vote and 156 seats were won by the Socialist Party, leaving the liberal government with an uphill task of assuring the middle classes and conservatives that the rise was only temporary and any possible revolution would be squashed immediately. Factories were left counting their losses as the Veneto victory meant the liberals no longer had to buy expensive war products and the high products made by the factories during the war years decreased. Reluctance to take on new workers led to unemployment. Unemployment hit the state hard and by 1919, 2 million were left unemployed. Many of these would be soldiers returning from the war and the concept of unemployment after their services seemed to frustrate and disappoint them. Trevino Alfonso The Rise of Fascism 02/05/2007 ...read more.