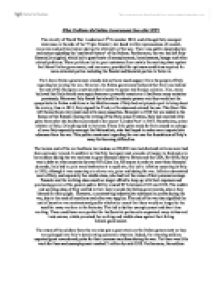 What Problems did Italian Governments face after WW1

What Problems did Italian Governments face after WW1 The atrocity of World War 1 ended on 11th November 1918, and although Italy emerged victorious on the side of the 'Triple Entente', she faced terrible repercussions of a social, economic and political nature during the aftermath of the war. There was public dissatisfaction and outcry regarding the 'mutilated victory' of the Italians. Furthermore, the war had left Italy financially crippled, which led to great bouts of unemployment, homelessness, hunger and other related problems. These problems led to great resistance from mainly the working class against the Liberal Italian government, and moreover, provided the optimum conditions required for more extremist parties including the Fascist and Socialist parties to thrive in. The Liberal Italian government already did not have much support from the people of Italy regarding her joining the war. However, the Italian government believed that Italy was behind the rest of the European countries when it came to power and foreign colonies. ...read more.

Inflation devastated most of Italy, and especially the middle class, who had lost the value of their personal savings. Peasants and the working class could no longer afford to keep up with their expenses and purchasing power of the general public fell by around 30 % between 1915 and 1918. The middle and working class of Italy unified in their hate towards the Italian governments, whom they blamed for their plight. However, in contrast big industrialists advanced in profits during the war, due to the need of munitions and other war supplies. The end of the war also signified the end of lucrative war contracts and profits which also meant that there would no longer be the need for many workers in the factories. This led to further unemployment and short time working. These conditions were perfect for the Socialist parties who organised many strikes and trade unions, which provoked the working and middle class against their failing Liberal government. ...read more.

They believed that they had only won a 'mutilated victory', and Liberalism was the culprit of this. In September 1919 a well known Nationalist D'Annunzio humiliated the respect that remained with the Liberal government by leading an invasion of the city of Fiume and occupied it in defiance of the Italian government for over a year. This completely undermined the Italian government, who were seen as weak and reluctant to make any territorial gains for Italy. D'Annunzio soon became a figurehead of Nationalism in Italy and was highly praised for his courage and defiance towards the weak Liberals. Overall, the weak Liberal government faced great political, social and economic problems after the Great War, even though they were one of the victor countries. The Liberal's incompetence to deal with such problems caused resistance against them to increase; indeed this caused the public to be drawn to the more extremist parties in the political spectrum, and provided the conditions for the birth of fascism and the uprise of the dictator: Benito Mussolini. ...read more.