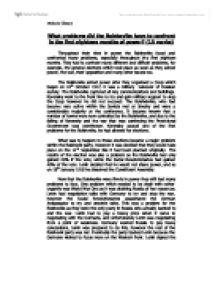 What problems did the Bolsheviks have to confront in the first eighteen months of power?

What problems did the Bolsheviks have to confront in the first eighteen months of power? (15 marks) Throughout their time in power the Bolsheviks faced and confronted many problems, especially throughout the first eighteen months. They had to confront many different and difficult problems, for example, the general elections which took place as soon as they seized power, the war, their opposition and many other issues too. The Bolsheviks seized power after they organised a Coup which began on 24th October 1917, it was a military takeover of Russian society. The Bolsheviks captured all key communications and buildings. Korensky went to the front line to try and gain military support to stop the Coup however he did not succeed. The Bolshekviks, who had become very active within the Soviets met at Smolny and were a considerable majority at the conference. It became known that a number of towns were now controlled by the Bolsheviks, and due to the failing of Kerensky and the war that was continuing the Provisional Government was overthrown. Kerensky caused one of the first problems for the Bolsheviks, he had allowed for elections. ...read more.

One third of Russian agricultural land was ripped away while half of her industrial capacity, which included other parts of Russia as well as the Ukraine, was also taken by the Germans. Even without the Treaty of Brest Litovsk, the Bolsheviks faced a major problem, there was a huge demand for food and a lack of transport which had to be ressolved if they wanted to stay in power. Huge famine and lack of transport were two of the main reasons why people joined the Civil War. Famine provided the backdrop to the Civil War. The dislocation of supplies that had occurred during the war against Germany persisted and until this was remedied whole areas of Russia remained in desparate economic plight, which did not help the Bolshevik's situation. The Bolsheviks caused themselves problems as they failed to end the hunger which is an important factor when looking at why military opposition initially opposed them in 1918. In addition to a fractured transport system, the Bolsheviks were also faced with the loss to Germany of Russia's main wheat supply area, the Ukraine. ...read more.

So as we can see the Bolsheviks did not only face internal opposition but external opposition too. It appeared to the Bolsheviks that Britain and her allies were intent on destroying them. This was matched by the allie's view that in making a spearate peace with Germnay the Bolsheviks had acted as "arch-traitors". Following the signing of the Treaty of Brest Litovsk British, French and American forces occupied the ports of Murmansk in the Arctic and Archangel in the White Sea. This was another problem which the Bolsheviks had to face. In conclusion, as we can see, throughout the first eighteen months of power the Bolsheviks had to over come many great problems, some of which had been facing Russia for years since earlier Tsars had been in power, for example lack of food and poor transport systems. However, even though the Bolsheviks faced great opposition and many problems they were still able to remain in power. Problems such as internal and external hositility, elections and the Civil War were all tough problems however it did not deter the Bolsheviks from their objectives of being and remaining in power. Michelle Chasey ...read more.