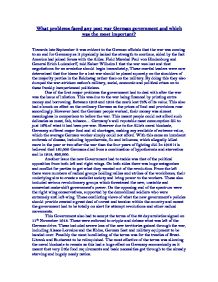 What problems faced any post war German government and which was the most important? Towards late September it was evident to the German officials that the war was coming to an end for Germany as it physically lacked the strength to continue, aided by the fact America had joined forces with the Allies. Field Marshal Paul von Hindenburg and General Erich Ludendorff, told Kaiser Wilhelm I that the war was lost and that negotiations for an armistice should begin immediately, These martial leaders were now determined that the blame for a lost war should be placed squarely on the shoulders of the majority parties in the Reichstag rather than on the military. By doing this they also dumped the war-stricken nation's military, social, economic and political crises on to these frankly inexperienced politicians. One of the first major problems the government had to deal with after the war was the issue of inflation. ...read more.

In 1916 it is believed that 121,000 Germans died from a combination of hypothermia and starvation and in 1918, 293,000. Another issue the new Government had to tackle was that of the political opposition from both left and right wings. On both sides there was huge antagonism and conflict for parties to get what they wanted out of the revolution. From the left there were numbers of radical groups holding rallies and strikes of the workforces, their underlying aim to create a socialist society and bring power to the workers. These also included serious revolutionary groups which threatened the new, unstable and somewhat make-shift government's power. On the opposing end of the spectrum were the right wing conservatives, supported by the demobilized soldiers who were extremely anti left-wing. These conflicting views of what the new government's policies should provide created a great deal of unrest and tension within the country and meant the government had to be totally on alert for attempt revolutions and other radical movements. ...read more.

As planned by Hindenburg and Ludendorff, the government received the blame for such a disaster. A myth developed shortly after the war to account for this unforeseen loss. It became widely believed that the German army had been "stabbed in the back" by the un-patriotic politicians. This view also maintained the opinion that the German army had remained strong to the end and could have gone on the fight to victory, but the politicians brought the troops home and signed the armistice. This view was quickly snatched up and used to criticize the new government. It became related to Germany's humiliation of defeat. This humiliation of the German nation would become one of the Governments biggest problems as it totally demoralized the nation creating a feeling of depression and for the government to correct the effects the war had on Germany they would require the support of the German people to bring about an economic recover. ...read more.