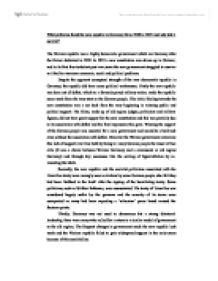 What problems faced the new republic in Germany from 1918 to 1923 and why did it survive?

What problems faced the new republic in Germany from 1918 to 1923 and why did it survive? The Weimar republic was a highly democratic government which ran Germany after the Kaiser abdicated in 1918. In 1919 a new constitution was drawn up in Weimar, and in its first four turbulent post-war years the new government struggled to survive as it had to overcome economic, social and political problems. Despite the apparent conceptual strength of the new democratic republic in Germany, the republic did have some political weaknesses. Firstly the new republic was born out of defeat, which to a formerly proud military nation, made the republic seem weak from the very start to the German people. This initial feeling towards the new constitution was a set back from the very beginning in winning public and political support. The Elites, made up of old regime judges, politicians and military figures, did not have great support for the new constitution and this was partially due to its association with defeat and the first impression this gave. Winning the support of the German people was essential for a new government and would be a hard task even without the association with defeat. However the Weimar government overcame this lack of support over time both by being to many German people the lesser of two evils (It was a choice between Weimar Germany and a communist or old regime Germany) ...read more.

Though these revolts were failures they did however emphasise the instability and volatility of the new republic. I think the reason why the Weimar government managed to hold on to power, despite putsches from both the right and left wings, is because as yet neither of these movements had a strong enough leader or enough public support. I think that this is made evident in the Kapp Putsch, for although they had sufficient arms and numbers of men they did not have the support of the people, which was their downfall. The problem of the electoral system did not come to light in the early years as none of the extremist parties ever gained enough support between 1919 and 1923 to pose a serious threat. The system of proportional representation was a problem from the start, though in theory it seemed a good idea as it was very democratic, in practice it was completely impractical. Proportional Representation is an umbrella term used to describe an electoral system that tries to align seats won with votes won, but this system allows smaller parties or 'third' parties to hold more seats than they would have in a majority system. In Germany this system was a problem because there were several larger parties and lots of 'third' parties which meant that there was never a clear majority winner after an election so the winning government wouldn't have enough of a majority without joining up with other parties to form a coalition party in order to pass laws and bills. ...read more.

However, there were those who gained from hyperinflation. For example those who owed money or had mortgages found that the though the amount of money they owed didn't change but the value of the money did and so all loans and debts could be paid off in one go. Also businesses were able to borrow money, spend it on new machinery and, and then pay it back for virtually nothing. The German government also benefited in at least one way. During WWI the government had borrowed vast sums to finance the war effort and as hyperinflation rose, the government saw its debts being worn out. The working class who could have been very badly affected by hyperinflation managed to survive as the trade unions made sure that wages rose with prices and so as prices went up so did their wages. In conclusion I think that though the Weimar republic did have its strengths and its key successes such as universal suffrage, increased rights, protection for germans, and the resolving of hyperinflation, it too had many flaws and weaknesses. I think that if it had not been for weakness of some of the attempted uprisings and disorganisation and lack of support of others then the Weimar government could quite realistically have been toppled. With out the support of the German people and the help of the freikorps when needed the Weimar government would not have been stable enough to withstand the many attacks and problems it faced. ...read more.