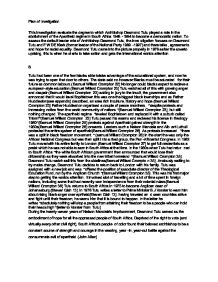 Plan of Invetigation This investigation evaluate the degree to which Archbishop Desmond Tutu played a role in the abolishment of the Apartheid regime in South Africa 1948-1994 to become a democratic nation. To assess the default leader role of Archbishop Desmond Tutu, the investigation focuses on Desmond Tutu and F.W DE Klerk (former leader of the National Party 1989-1997) and there talks , agreements and hope for racial equality. Desmond Tutu came into the picture properly in 1976 aafter the soweto uprising, this is when he starts to take action and gets the international worlds attention. B Tutu had been one of the few blacks able totake advantage of the educational system, and now he was trying to open that door to others. The state said no however:Blacks must be educated for their future as common labours.(Samuel Willard Crompton 22) No longer could blacks expect to recieve a european-style education.(Samuel Willard Crompton 23) Tutu watched all of this with growing anger and despair (Samuel Willard Crompton 23) adding injury to the insult, the government also annonced that it would level Sophiatown.this was one the biggest black townships and as Father Huddleston(see appendix) ...read more.

The source analyses Tutus movements his impact on the International nations. Desmond Mpilo Tutu was born October 7 1931 in Klerksdorp, a small mining community. He was born into the harsh world of racial segregation. Even that time racial segregation was present but not as visible as it was later going to be. This source was written in 2007. Tutu still lives now in present. The source includes interviews from Tutu and other important figures from the period of apartheid. Samuel Willard Crompton was not in South Africa at the time of Apartheid so the book is limited in that sense. On the other hand Desmond Tutu is was alive when the book was published and is still alive. The books value include the in depth look at the life of Desmond Tutu and the steps he took to abolish the Apartheid regime. Desmond Tutu letter to Voerter D Analysis An independent South Africa was bound to be, with or without blodshed, like it did in many other countries in Africa like Zimbabwe, Libya and Egypt. However, was Botha ready to let all South Africans live together as one Nation? Desmond Tutu was not in the country the whole time during apartheid, and his fellow leader, Nelson Mandela was imprisoned. ...read more.

1976 IN SHARPEVILLE SOUTH AFRICA TUTUS NIGHTMARES BECAME TRUE. IN A PROTEST AGAINST FORCED TEACHING OF AFRIKAANS IN ALL SCHOOL, STUDENTS PROTESTED AGAINST THIS. THE PROTEST WAS MEANT TO BE A PEACEFUL MARCH BUT ENDED IN BLODSHED WITH THOUSANDS DYING, INCLUDING CHILDREAN AND WOMEN. THE POLICE WERE INTIMIDATED BY THE PROTESTS AND REPLIED WITH GUNSHOTS LEAVING MANY DEAD AND SERIOUSLY INJURED. THIS WAS WHEN SOUTH AFRICA GOT THE WORLD ATTENTION GREATEST. THE UNITED NATIONS PASSED SEVERAL RESOLUTIONS ON SOUTH AFRICA, SANCTIONS WERE PLACED ON THEM. THE SANCTIONS "KEPT US ON OUR TOES"(INTERVIEW FW DE KLERK). THE SANCTIONS KEPT SOUTH AFRICA ISOLATED FROM THE REST OF THE WORLD. THIS WAS WHEN THE APARTHEID REIME REALISED THAT SOMETHING HAD TO BE DONE, TO RETORE ORDER AND PUT SOUTH AFRICA BACK ON THE MAP. HOWEVER BOTHA HAD NO INTENTIONS OF HAVING A DEMOCRATIC REPUBLIC WERE BLACK SOUTH AFRICANS COULD VOTE. IN 1985 HE DECLARES A STATE OF EMERGENCY. THIS WAS PROBABLY BECAUSE HE WAS IN FEAR. ANTI.APRTHEID PROTESTS WERE HAPPENING THROUGHOUT THE COUNTRY. DESMOND SUPPORTED THE PROTESTS AS LONG AS THEY WERE PEACEFUL, HE MOSTLY TARGETED THE ACTUAL APRTHEID GOVERMANT BUT IN MATURE AND PEACEFUL WAY. HE DID SUPPORT THE ANC BUT NOT THE MILITANT SIDE OF IT. .............WAS AWARDED (1984) THE NOBEL PEACE PRIZE FOR HIS NONVIOLENT ADVOCACY OF REFORM ...read more.