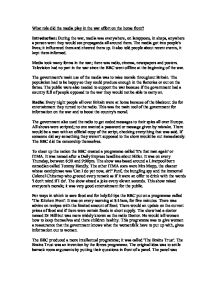 What role did the media play in the war effort on the home front?

What role did the media play in the war effort on the home front? Introduction: During the war, media was everywhere, on lampposts, in shops, anywhere a person went they would see propaganda all around them. The media got into people's lives; it influenced them and cheered them up. It also told people about recent events, it kept them informed. Media took many forms in the war; there was radio, cinema, newspapers and posters. Television had no part in the war since the BBC went offline at the beginning of the war. The government's main use of the media was to raise morale throughout Britain. The population had to be happy so they could produce enough in the factories or out on the farms. The public were also needed to support the war because if the government had a country full of people opposed to the war they would not be able to carry on. Radio: Every night people all over Britain were at home because of the blackout. So for entertainment they turned to the radio. This was the main tool of the government for information on the war and to boost the country's moral. The government also used the radio to get coded messages to their spies all over Europe. All shows were scripted; no one wanted a password or message given by mistake. There would be a man with an official copy of the script, checking everything that was said. If someone did say something they weren't supposed to the show would be cut immediately. The BBC did the censorship themselves. To cheer up the nation the BBC created a programme called 'It's that man again' or ITMA. It was named after a Daily Express headline about Hitler. It was on every Thursday, between 8:30 and 9:00pm. The show was based around a Liverpool born comedian called Tommy Handly. The other ITMA stars were Mrs Mopp, the cleaner whose catchphrase was 'Can I do yer now, sir?' ...read more.

The picture below was published on the 15th September 1940; it is an ideal example of togetherness. All the people have survived and helped each other along the way. Even though there houses have been bombed and all there salvageable furniture is in a lot they are all happy to be alive and are holding each other by the arms and have all got smiles on their faces! Some are even giving the thumbs up. This photograph was used to boost morale, it showed community spirit and teamwork. It makes the Blitz seem liveable. The picture below was taken on the 21st January 1943; the government's censors banned it. It shows dead children in body bags from the London, Catford Girl's School. This would have been to upsetting for the public. The moral would have fallen dramatically; support for the war may have wavered. Children would be considered too innocent to die. The picture would have upset to many people. The British and the German newspapers had two completely different views on what happened at Dunkirk. A 1940's German picture magazine called Signal published this ' The great battle of annihilation. Altogether more than 1.2 million prisoners have fallen into German hands, besides limitless amounts of war material.... France and Britain's finest troops are annihilated. England is now separated from France and exposed to a direct German attack. On June 4th this battle of annihilation came to an end with the fall of Dunkirk'. An English version of the event was published in the Daily Mirror on Saturday, June 1st 1940 this is what it said 'For days past thousands upon thousands of our brave men of the B.E.F have been pouring through a port somewhere in England, battle-worn, but thank God, safe and cheerful in spite of weariness. We may hope that already at least half of that gallant force has been withdrawn from the trap planned for them by Nazi ruthlessness...Praise in words is a poor thing for this huge and heroic effort. ...read more.

The media invented the Blitz spirit, which kept most Londoners going during the worst days of the bombings. It also raised spirits with the daily reports of courage and bravery from the front lines. People would congregate around radios when the comedy shows were on, they would laugh and enjoy themselves. The cinemas would whisk away their occupants for a few hours, the bombs and the harshness of war was left outside. The moral of the country was also important for the production of war materials. If the public were depressed and scared of a town or city since it was being bombed they would move. The government did not want this to happen, because if the people left the cities there would be no one to work in the factories or workhouses. So in turn the government made every effort to keep the spirits up. Due to the extended efforts of all the media sections, the countries moral remained high during the war. The people of Britain needed to know what was happening in the war. The media provided the country with information about the war, at home and abroad. The newspapers and the news were the main ways in which the public obtained their information. Entertainment was important for all people. They needed to have a little fun and get away from the war for a little while. The cinema would be the best example of this. As well as going out to be entertained another main option was to stay in and listen to the radio. With your family around you, you could joke about the day and listen to some comedy programmes. Entertainment was desperately needed to raise moral of the people, without it life may have just been a bit too monotonous. The media reinforced the community spirit; it made the people continue on in their everyday struggles. Each person in Britain was fighting Hitler in his or her own way. The media was responsible for this; it kept Britain fighting on. ...read more.