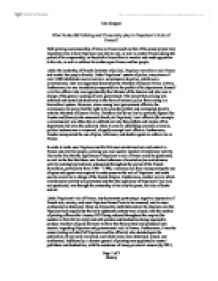 What Roles did Policing and Censorship play in Napoleon's Rule of France?

What Roles did Policing and Censorship play in Napoleon's Rule of France? Both policing and censorship of items in France (such as that of the press) played very important roles in how Napoleon was able to rule, as well as control France during the period of his emperorship, as they both allowed him to monitor and crush opposition to his rule, as well as enforce his wishes upon France and her people. Under the leadership of Fouche (minister of police), Napoleon was able to rule France and control her people directly. Under Napoleons' system of police, every town of over 5,000 inhabitants was to receive a commissaire de police, which was a commissioner, who was appointed directly by the Ministry of General Police in Paris. Furthermore, he was immediately responsible to the prefect of his department, himself a civilian official who was appointed by the Minister of the Interior and who was in charge of the general running of local government. ...read more.

and displays had been widespread throughout the period of the French Revolution, particularly from 1790 - 1799), a secret police force incorporating the use of spies and agents was required in order preserve the rule of Napoleon, and make sure he was to be in charge of the French Empire. Furthermore, another way in which revolutionary activity was prevented and that the legitimacy of Napoleon's rule was not questioned, was through the censorship of not only the press, but also of books and art. Under Napoleons' rule of France, any documents portraying a negative impression of French rule, society, and even Napoleon himself was to be censored, and in cases confiscated or destroyed. Many un-favourable establishments to the absolute rule that Napoleon had acquired by the early eighteenth century were closed, with the number of printing offices after January 1811 being reduced throughout the empire (the number in Paris fell to sixty) ...read more.

Napoleon was also allowed to subject his law on censorship to further decree and future dispositions. The task of censorship was also heavily linked to the police force in France. The minister of police, as well as prefects of departments and Printing, was expected to assist in the task of carrying out Napoleon's campaign of censorship, or as Napoleon himself stated, to "Help put this grand engine of despotism into effect." Fouche and his police force were expected to work alongside the censors appointed to the various provinces of France regarding book censorship. In conclusion, both policing and censorship played an integral role in how Napoleon was able to rule the French empire, as they allowed him to not only force the public into what action Napoleon wanted them to take and limit opposition to his rule (via policing), but furthermore, allowed Napoleon to be portrayed in the way that he wished every French person to view him (via censorship). Both factors allowed Napoleon to exercise supreme control over his subjects, and helped to cement his position as emperor of France. Alec Cropper Page 1 of 2 History ...read more.