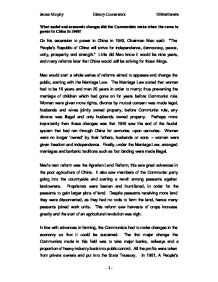 What social and economic changes did the Communists make when the came to power in China in 1949?

What social and economic changes did the Communists make when the came to power in China in 1949? On his ascension to power in China in 1949, Chairman Mao said: "The People's Republic of China will strive for independence, democracy, peace, unity, prosperity and strength." Little did Mao know it would be nine years, and many reforms later that China would still be striving for those things. Mao would start a whole series of reforms aimed to appease and change the public, starting with the Marriage Law. The Marriage Law stated that women had to be 18 years and men 20 years in order to marry; thus preventing the marriage of children which had gone on for years before Communist rule. Women were given more rights, divorce by mutual consent was made legal, husbands and wives jointly owned property, before Communist rule, any divorce was illegal and only husbands owned property. Perhaps more importantly than these changes was that 1949 saw the end of the feudal system that had ran through China for centuries upon centuries. ...read more.

700 new production plants helped China to double their output of coal, oil and cement and quadruple the amount of pig iron, steel and fertilizer produced. These types of advances had never been seen before in China, yet they did not come without a cost. Light industry, such as cotton making, was neglected whilst this heavy industry was developed, therefore people had to live without consumer goods. There was now many more mouths to feed in industrialised areas, consequently different stage farming co-operatives were implemented to make peasants farm more effectively. In some villages, 'lower-stage co-operatives' were made; up to fifty families pooled their land and farmed it together in a more efficient manner. Still more advantageous was that families still owned the land and were paid rent by the Communists for its use. However, the Communists realised that the 'lower-stage co-operatives' would not produce enough food for the considerable workforce. Therefore, Communist Party officials went to the countryside and almost forced families to join 'higher-stage co-operatives', which consisted of 200-300 families clubbing together their land and farming it even more effectively. ...read more.

All children were put into nurseries or schools so both their parents could work full time. Communes were not just where the peasants worked but also where the people did everything. Propaganda played a massively important role in the "Great Leap Forward". The Chinese had experienced it seldom before, but now loudspeakers played speeches and music whilst people worked and it is down to this, it could be said, that huge projects were completed ahead of schedule. One such example being when a dam outside Beijing was built without great machinery and people dug the materials with their bare hands. The final major reform the Communists made was in the form of the "Backyard Steel Campaign". Steel furnaces were placed in towns, and people with little experiences of how to operate them attempted to make steel with them. Against all odds, the amount of steel produced in 1957 rose by 65% on the year prior. The Communist Party made many social and economic changes after they came to power; some good, some bad but all had an impact on the success of modern day China. James Murphy History Coursework 10Braithwaite - 1 - ...read more.