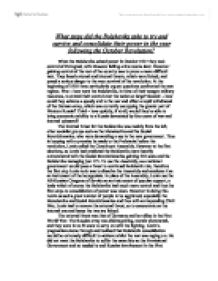 What steps did the Bolsheviks take to try and survive and consolidate their power in the year following the October Revolution?

What steps did the Bolsheviks take to try and survive and consolidate their power in the year following the October Revolution? When the Bolsheviks seized power in October 1917 they took control of Petrograd, with Moscow falling a few weeks later. However gaining control of the rest of the country was to prove a more difficult task. They faced external and internal threats, which were linked, and posed a serious danger to the very survival of the revolution. At the beginning of 1918 three particularly urgent questions confronted the new regime. First - how were the Bolsheviks, in view of their meagre military resources, to extend their control over the nation at large? Second - how could they achieve a speedy end to the war and effect a rapid withdrawal of the German army, which was currently occupying the greater part of Western Russia? Third - how quickly, if at all, would they be able to bring economic stability to a Russia devastated by four years of war and internal upheaval? ...read more.

However in doing this Lenin caused a great number of people to be aggrieved, especially the Mensheviks and Social Revolutionaries and thus with an impending Civil War, Lenin had to remove the external threat, so to concentrate on the internal one and hence the two are linked. The external threat was that of Germany and her allies in the First World War. The Russian army was disintegrating, morale plummeted, and they were in no fit state to carry on with the fighting. Lenin's pragmatism shone through and realised that Bolshevik consolidation would be extremely difficult to achieve whilst the war was raging on. He did not want the Bolsheviks to suffer the same fate as the Provisional Government and so needed to end Russian involvement in the First World War quickly. Peace was made in the Treaty of Brest Litovsk 1918, which cost Russia vast expanses of her territory including Lithuania, Estonia, Latvia, Finland and the Ukraine. ...read more.

logic demanded that in the Bolshevik treatment of the peasants the primary consideration must be how best they could be induced or forced into becoming suppliers of adequate quantities of food. Therefore in 1917 the Decree on Land and the Decree on Worker's Control were brought in, to first of all please the mass of the population so the Bolsheviks power would be consolidated and secondly making agriculture and industry more efficient by legitimising practices that had been around since February, for example factories run by the workers. Therefore in conclusion the Bolsheviks faced several problems that seriously jeopardised the revolution, however in Lenin's pragmatism we find the most important reason why they survived because it was his steps, most importantly getting Russia out of World War One, by signing the Treaty of Brest Litovsk, as it allowed them to concentrate on internal distractions, which helped the Bolsheviks to survive their first year and consolidate their power for future years to come. Adam Sivner 821 words ...read more.