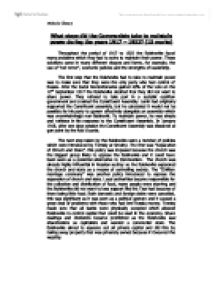 What steps did the Communists take to maintain power during the years 1917 - 1922?

What steps did the Communists take to maintain power during the years 1917 - 1922? (15 marks) Throughout the period of 1917 to 1922 the Bolsheviks faced many problems which they had to solve to maintain their power. These solutions came in many different shapes and forms, for example, the use of "red terror", economic policies and the strengths of leadership. The first step that the Bolsheviks had to take to maintain power was to make sure that they were the only party who had control of Russia. After the Social Revolutionaries gained 40% of the vote on the 12th September 1917 the Bolsheviks decided that they did not want to share power. They refused to take part in a socialist coalition government and crushed the Constituent Assembly. Lenin had originally supported the Constituent assembly, but he calculated it would not be possible for his party to govern effectively alongside an assembly which was overwhelmingly non-Bolshevik. To maintain power, he was simple and ruthless in his response to the Constituent Assembly. In January 1918, after one days session the Constituent Assembly was dissolved at gun point by the Red Guards. The next step taken by the Bolsheviks were a number of policies which were introduced by Tortsky at Smolny. ...read more.

This was the only way to stop chaos caused by factory workers' committees who had voted themselves huge pay rises, intimidated management and stolen materials for illegal goods. Not all workers were against nationalisation as they were desperate to keep their jobs. Labour discipline was brought back to the work place as a means of maintaining Bolshevik power. There were fines for lateness and absenteeism. Internal passports were introduced to stop people fleeing to the countryside. Piece-work rates were brought back, along with bonuses and a work book that was needed to get rations. The rations were based on class. The labour force and Red Army soldiers were given priority. Smaller rations were given to servants and professionals such as doctors. The smallest rations, barely enough to live on were given to the middle classes, now known as the "former class". The economic policy of War Communism was not very popular, and Lenin could see this: "war communism was thrust upon us by war and ruin. It was not, nor could be a policy that corresponded to the economic task of the proletariat. It was a temporary measure." As soon as the civil war was over there was an abrupt change in economic policy. ...read more.

The problem was that no one was really sure who the counter-revolutionaries were. Having good leadership within the party was also another way in which the Bolsheviks maintained power, and without taking many steps the Bolsheviks were much stronger than the Whites were. The Whites were so divided and lacking in unity that the Reds were able to destroy them one by one and exploit their differences. The Reds were strong in key central urban areas which allowed them to co-ordinate and distribute more easily and effectively. The Bolsheviks used terror to maintain their control. Between December 1917 and February 1922 140,000 people were executed and Trotsky believed this was the right thing to do to maintain his power: "We shall not enter into the kingdom of socialism with white gloves on a polished floor." Trotsky and Lenin both had clear and dynamic control. Trotsky was well respected, with a charasmatic style who had a high profile. In conclusion, we can see that the Bolsheviks took many very important steps to maintain in power. Throughout 1917 to 1922 they use terror as an instrument and they also introduced a number of policies economically and politically to help them remain in power. The strong characteristics and good leadership of the Bolshevik party also allowed for them to remain in power during the years 1917 to 1922. Michelle Chasey ...read more.