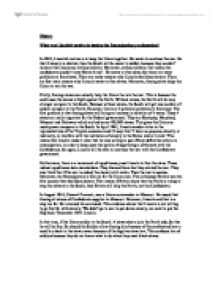 What was Lincoln's motive in issuing the Emancipating proclamation?

History What was Lincoln's motive in issuing the Emancipating proclamation? In 1861, Lincoln's motive is to keep the Union together. He wants to continue the war. So that if slavery is abolish, then the South will be easier to defeat, because they couldn't hold on their economic without slavery. Moreover, without slavery, that means the confederate couldn't have 'Slave Army'. He wants to free slave, but there are many problems to free slaves. There are many reasons why Lincoln abolishes slavery. There are few main reasons why Lincoln wants to free slaves. Moreover, freeing slave helps the Union to win the war. Firstly, freeing slaves can actually help the Union the win the war. This is because the south uses the slaves to fight against the North. Without slaves, the North will be way stronger compare to the South. Because without slaves, the South will get less number of soldier compare to the North. However, there are 2 potential problems to free slave. The first problem is that freeing slaves will bring an increase in isolation of 4 states. ...read more.

In August 1861, General Fremont, was a Union commander in Missouri. He issued that freeing all slaves of Confederate supplier in Missouri. However, Lincoln said that is a step too far. He removed his command. This evidence shows that Lincoln is not willing to go that far with slavery. 'We didn't go to war to put down slavery; we went to put the flag back.' December 1861 Lincoln. In this time, if the Union soldier in the South. A slave asks to join the North side, So that he will be free. So should the Soldier allow freeing him because of the confiscated law or send him back to the slave owner because of the fugitive slave law. This confuses lots of soldiers because they do not know what to do when they meet black slaves. In spring 1862, the Congress takes action of slavery. In April 1862, slavery in Washington abolished. In June 1861, Congress abolishes slavery in all the federal territories. In this time, some people says that it is a step too far, but on the other hand, some people says its not far enough because it didn't get those 4 isolate states into the Union. ...read more.

This is because most of them believe this is a far too further. However, Blare is the only one disapproval it. This is because he believes that this would weak the Republican Party. On the other hand, Stuart said that let issue this after we have victory after the battle antietum. The Emancipation proclamation is issue in 22 of September 1862 after the battle of Antietam. Now, all slaves in enemy territory that means the Confederate area will be allow taking away by the Union troops. By September 1862, British Prime Minister Palmers tan think this event is rubbish. As we can see Lincoln did lots of thing at the end to abolish slavery. Even though he does not want to go a step forward in the beginning. But at the end he did put it a step further. So we can see that he tired to abolish slavery because he wants the Confederate government to lose control. So that the Federal government can win in the Civil War. Also we can see that Lincoln is a really clever man. He got really good political skills. So, we can see that why the Federal government win the Civil war. ...read more.