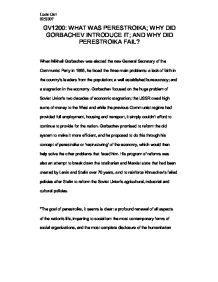 What was perestroika; why did Gorbachev introduce it; and why did perestroika fail?

GV1200: WHAT WAS PERESTROIKA; WHY DID GORBACHEV INTRODUCE IT; AND WHY DID PERESTROIKA FAIL? When Mikhail Gorbachev was elected the new General Secretary of the Communist Party in 1985, he faced the three main problems: a lack of faith in the country's leaders from the population; a well established bureaucracy; and a stagnation in the economy. Gorbachev focused on the huge problem of Soviet Union's two decades of economic stagnation; the USSR owed high sums of money to the West and while the previous Communist regime had provided full employment, housing and transport, it simply couldn't afford to continue to provide for the nation. Gorbachev promised to reform the old system to make it more efficient, and he proposed to do this through his concept of perestroika or 'restructuring' of the economy, which would then help solve the other problems that faced him. His program of reforms was also an attempt to break down the totalitarian and Marxist state that had been created by Lenin and Stalin over 70 years, and to reinforce Khruschev's failed policies after Stalin to reform the Soviet Union's agricultural, industrial and cultural policies. ...read more.

overturned Communist regimes in Eastern Europe, the Warsaw Pact withered away, and back in the Soviet Union, the first openly-contested elections for new Congress of People's Deputies took place. Gorbachev had support from many of the world leaders of the time, who commended him for perestroika and his 'carefully prepared program rather than a pompous declaration'8. "...We will give [Gorbachev] our assurance that America welcomes this reform not as an adversary seeking advantage but as a people offering support. ....I will assure him that there is no greater advocate of perestroika than the president of the United States." George W. Bush, President of the United States Special televised address, November 22, 19899 In the Soviet Union itself, however, reactions to the new policies were mixed as they disrupted the entrenched traditional power bases in the party, economy, and society without replacing them entirely. The freedoms of assembly, speech, and religion, the right to strike, and multi candidate elections as part of his glasnost reforms undermined not only the Soviet Union's authoritarian structures, but also the familiar feelings of order and predictability that the population was used to - they were forced to get used to the drastic reforms too quickly. ...read more.

Reactionaries are gaining power. Reformers have slumped into the bushes. A dictatorship is coming. No one knows what this dictatorship will be like, what kind of dictator will come to power and what order will be established."10 This culmination of dissatisfaction with Gorbachev and his failed perestroika eventually led to the failed Coup in August 1991, when Gorbachev was in effect kidnapped in his own house while on holiday in the Crimea, and forced by his own Chief of Staff Valery Boldin, the head of the KGB Yuri Plekhanov and six other coup conspirators to sign a referendum which declared the Soviet Union in a state of emergency which would authorise reforms without the consent of Gorbachev. Three days later, the coup leaders fled after their coup failed, and Boris Yeltsin, the unofficial saviour of the country, took up office after Gorbachev's resignation and the Soviet Union and perestroika reforms officially collapsed. I believe that Gorbachev's proposed reforms for the Soviet Union could have been beneficiary to the country, however I think he was too adventurous in his policy reforms which eventually led to them failing, especially as they had been implemented too fast without careful planning. Perestroika seemed to alter the economy without fixing it; however many argue it did lead the way to a free market economy which exists today. ...read more.