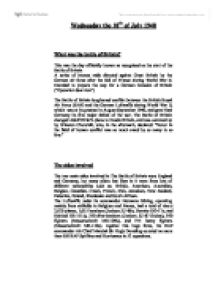 What was the battle of Britain?

Wednesday the 10th of July 1940 What was the battle of Britain? This was the day officially known as recognised as the start of the Battle of Britain A series of intense raids directed against Great Britain by the German air force after the fall of France during World War II. Intended to prepare the way for a German invasion of Britain ("Operation Sea Lion") The Battle of Britain lengthened conflict between the British Royal Air Force (RAF) and the German Luftwaffe during World War II, which was at its greatest in August-September 1940, and gave Nazi Germany its first major defeat of the war. The Battle of Britain changed Adolf Hitler's plans to invade Britain, and was summed up by Winston Churchill, who, in the aftermath, declared: "Never in the field of human conflict was so much owed by so many to so few." The sides involved The two main sides involved in The Battle of Britain were England and Germany, but many pilots that flew in it were from lots of different nationalities such as: British, American, Australian, Belgian, Canadian, Czech, French, Irish, Jamaican, New Zealand, Palestine, Poland, Rhodesian and South African. ...read more.

With his ground forces halted at the English Channel, Hitler launched an attempt to win command of the skies over Britain by aerial bombardment, as a return fire to the destruction of British naval and airborne defences and the invasion of the British Isles by sea (Operation Sealion). The forces engaged in the massive air battle that followed were uneven. What happened? The heavy air attack on Britain, on July 10, 1940, involved wave after wave of fighter-escorted bombers targeted against the shipping and harbours of southern England. This reached a climax on August 15, when 76 bombers were shot down with a loss of 34 RAF fighters. The second phase of Marshal Hermann G�ring's offensive, targeted at British air defence installations, from August 24 to September 6, German raids destroyed 466 Hurricanes and Spitfires, with 103 British pilots killed and 128 badly wounded, a quarter of the total British pilot strength. German losses may have been twice as many as the British, but at this point the hard-pressed RAF was within a whisker of defeat. ...read more.

About Radar Outnumbered though they were, the British forces had certain advantages that were to prove crucial as the fighting progressed. First, the British fighters were faster and more manoeuvrable than their German opponents. Secondly, just before the outbreak of war, the British had constructed a chain of radar early-warning stations which enabled them to measure the strength and course of incoming enemy aeroplane formations and concentrate superior numbers of their own forces to meet them. Radar also enabled the British to get rid of constant patrols, a vital saving in fuel and human energy. Thirdly, the British were flying from home bases with home-controlled lines of communication, allowing them to constantly use and refuel short-range fighters in the continuing battle, whereas the Germans had to return to French airfields. Fourthly, a British pilot shot down unwounded over Britain could be back in action within hours, while a German pilot was definitively lost. The Conclusion In the end Britain won by killing and shooting down more enemy pilots than Germans did. The great loss of pilots made Hitler pull back his forces and change his plans to conquer England. ...read more.