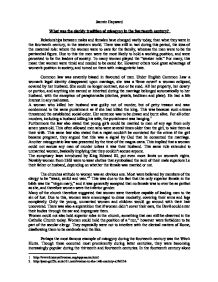 What was the clerkly tradition of misogyny in the fourteenth century?

Jasmin Hayward What was the clerkly tradition of misogyny in the fourteenth century? Relationships between males and females have changed vastly today, than what they were in the fourteenth century, in the western world. There was still in tact during this period, the idea of the maternal role: where the women were to care for the family, whereas the men were to be the patriarchal figure. Due to this the men were the most likely to hold a working position, and were perceived to be the leaders of society. To many women played the "weaker role." For many, this mean that women were timid and needed to be cared for. However others took great advantage of women's position in society, and turned on them with misogynistic hate. Common law was severely biased in favoured of men. Under English Common Law a woman's legal identity disappeared upon marriage, she was a 'feme covert' a woman eclipsed, covered by her husband. She could no longer contract, sue or be sued. All her property, her dowry or portion, and anything she earned or inherited during the marriage belonged automatically to her husband. with the exception of paraphernalia (clothes, jewels, bedlinen and plate). ...read more.

There was also a superstition that if women didn't cover their ears, the Devil could enter their bodies through the ear and impregnate them. Women could not also hold superior roles in the church, something that can still be observed in the Catholic Church today. Women could hold the position of a "nun," however were forbidden to be part of the secular clergy. They especially were not to interfere with the clerical matters of Rome, disallowing them to be cardinals and the like. Perhaps the most famous example of misogyny during the fourteenth century was the Witch Hunts. Though these occurred most prominently during latter centuries, they were becoming increasingly popular during the thirteenth and fourteenth centuries. In the fourteenth century alone 100,000 women were killed in Europe, having been proclaimed guilty of being a sorceress. Out of all the people who were tried for the crime of witchcraft seventy five percent of them were women. Many consider this to be victimisation of women. They were seen as lustful objects, much more capable of sinning than the man. They were seen as morally weak, sexually voracious, and more likely to be tempted by the Devil. Furthermore many were increasing their status in society, and this could have been seen as a backlash to that. ...read more.

Many viewed it as generally being a waste of time, as the women were just to serve their husbands, and had no need for education. Some even believed that the women were severely unintelligent as compared to the men, and that they simply couldn't comprehend academic learning. There was even the case that many were scared to educate women, as they may use it for sin. Even in aristocratic circles therefore very few women learned to even read and write. Furthermore there was the general case that women had very limited roles in society. Their roles were limited, many merely served in their homes, others were prostitutes. Though there is evidence that some worked in mills, and the like, taking on traditional male occupations, it was incredibly rare for a female to have a high ranking position in terms of the court. It is clear therefore that women held the lesser role in society, and that men fully abused this. Misogyny is the act of hatred against women, and although, I am not suggesting that all men hated women, it is clear that they generally viewed as being the weaker and more likely to sin out of the two genders. Due to this, men took this as their opportunity to suppress women. 1 http://www.historyofwomen.org/oppression.html 2 http://pam-griffin.suite101.com/women-in-the-14th-century-a196534 ...read more.