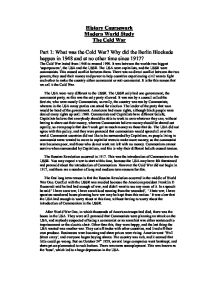 What was the Cold War? Why did the Berlin Blockade happen in 1948 and at no other time since 1917?

History Coursework Modern World Study The Cold War Part 1: What was the Cold War? Why did the Berlin Blockade happen in 1948 and at no other time since 1917? The Cold War lasted from 1948 to around 1990. It was between the worlds two biggest 'superpowers', the USA and the USSR. The USA were capitalists, and the USSR were communists. This caused conflict between them. There was no direct conflict between the two powers; they used their money and power to help countries experiencing civil wars to fight each other to make the country either communist or anti-communist. It is for this reason that we call it the Cold War. The USA were very different to the USSR. The USSR only had one government; the communist party, as this was the only party allowed. It was run by a council called the Soviets, who were mostly Communists, so really, the country was run by Communists; whereas in the USA many parties can stand for election. The leader of the party that won would be head of the government. Americans had more rights, although black people were denied many rights up until 1960. Communists and Capitalists have different beliefs; Capitalists believe that everybody should be able to work to earn whatever they can, without having to share out their money, whereas Communists believe money should be shared out equally, so even people that don't work get as much money as those that do. ...read more.

America went 'Wall Street crazy', and everyone began buying shares. The country was rich, and it seemed that little could go wrong. But on October 24th 1929, several large companies went bankrupt, and share prices plummeted to rock bottom. There was mass unemployment. This was known as the 'bust', which led to a huge depression in the USA. Then in 1939, World War Two began. This was the medium term reason for why conflict didn't happen until 1948. Hitler was leader of the Nazi party in Germany. They were a fascist party, and a far worse enemy to the USA than Communism. The USA and the USSR were allies in the war, as they had a common enemy, and Stalin, the Soviet leader in Russia was even known as 'good old uncle Joe' in the USA at this time. Being paranoid about Communism was at the back of the Americans minds. However, even before the war finished in 1945, tension had begun to build between the USA and the USSR. There are many short-term reasons that built up the tension between the two countries, leading up to the Cold war. As it was clear that Hitler was going to be beaten, Communism had become a great threat again. Once the power had gone there was a vacuum, leaving room for Communism to spread. ...read more.

The only country which had not been taken over was Greece, where there had been a civil war going on since 1944. Britain gave money and weapons to the Royalists, to stop the Communists from winning the war. Eventually, they could not afford to pay any more, so Truman stepped in. He said that Communism must be 'contained', and gave Greece 400 million dollars, with which they went on to win the war in 1949. Truman's theory became known as the 'Truman Doctrine'. The US Secretary of State, George Marshall carried this on with 'Marshall aid'. He gave money to many European countries to enable them to repair war damage and build up industry. He thought that this would stop countries from falling to Communism. Stalin was very much against the 'Truman Doctrine' and the 'Marshall Plan', and said they were America's plans for world domination. He set up an organisation called 'Cominform' which was to organise communist activities in Europe, therefore making them stronger. The Cold War began when Europe was divided between the communist countries in the East, and the non-communist countries in the West. At first this was a line on the map, but became an actual border of minefields, barbed wire and watchtowers, which very few people could cross. This happened because the Soviet Union and the Western Allies could not agree on how to run their zones. This became known as the 'Berlin Blockade', one of the highest tension points so far, and the starting point of the Cold War. ...read more.