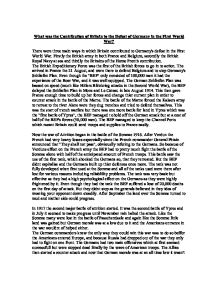 What was the Contribution of Britain to the Defeat of Germany in the First World War?

What was the Contribution of Britain to the Defeat of Germany in the First World War? There were three main ways in which Britain contributed to Germany's defeat in the First World War. Firstly the British army in both France and Belgium, secondly the British Royal Navy at sea and thirdly the Britains of the Home Front's contribution. The British Expeditionary Force was the first of the British forces to go in to action. The arrived in France the 21 August, and were there to defend Belgium and to stop Germany's Schliefen Plan. Even though the "BEF" only consisted of 100,000 men it had the experiance of the Boer War, and it was well equipped. The German Schliefen Plan was bassed on speed (much like Hitlers Blitzkrieg attacks in the Second World War), the BEF delayed the Schliefen Plan in Mons and Le Cateau in late August 1914. This then gave France enough time to build up her forces and change thier currant plan in order to counter attack in the battle of the Marne. The battle of the Marne forced the Kaisers army to retreat to the river Aisne were they dug trenches and tried to defend themselves. ...read more.

The German commanders knew the only way they could win this war was to do so beffor the Americans entered Europe, and because Russia had dropped out of the war they only had to fight on one front. The Germans had two main offensives which at first seemed successfull but were stopped dead litrally by the wave of American troops. The Allies then started a counter attack and now that German morale was at an all time low it wasn't long until Germany was forced to defeat and the ceasefire signed on 11 November. The Royal Navy also had an important part to play in World War One. The main use of the British Navy was to defend its shores against any German attacks, and to protect British convoys containing British soldiers heading off to France. The Royal Navy also also put in to action a blockade to try and strangle the German nation in to defeat via starvation. The British Navy easily controlled the sea even though the Germans tried to equal its greatness in there own navy. The major sea battle of the North Seas was the battle of Jutland, which took place on 31 May and 1 June 1916. ...read more.

DORA even restricted pub opening times so that alchol wouldn't cause absense from work. The government also used propaganda to convince people to eat less and so forth if not then you aren't considered to be British or your in leauge with the Kaiser. Women had a major role in the home front, at first they were used in propaganda campaings to encourage enlistment and as more and more men went to fight women had to take over there jobs in factories and as buss drivers and postmen. Even though they did the jobs equaly well they were still paid less. They also joined the Womens Land Army, who replaced farmers and farm hands who went to war.MAny women were also nurses in the Red Cross. Eventually the Germans used aeroplanes and Zepplins to attack the home front so British pilots had to fight the enemy off in thier primative plains which were as reliable as a racing car with out an engine. But as the war progresed so did the technology and the planes became faster more reliable and better fighting machines. In 1918 the Royal Air Force was formed and with great effect. We can see now that Britain played a principal role in the First World War and that without its contribution we could easily be speaking German fight now. ...read more.