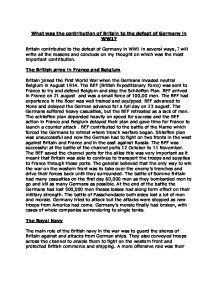 What was the contribution of Britain to the defeat of Germany in WW1?

What was the contribution of Britain to the defeat of Germany in WW1? Britain contributed to the defeat of Germany in WW1 in several ways, I will write all the reasons and conclude on my thought on which was the most important contribution. The British army in France and Belgium Britain joined the First World War when the Germans invaded neutral Belgium in August 1914. The BEF (British Expeditionary Force) was sent to France to try and defend Belgium and stop the Schlieffen Plan. BEF arrived in France on 21 august and was a small force of 100,00 men. The BEF had experience in the Boer was well trained and equipped. BEF advanced to Mons and delayed the German advance for a full day on 23 august. The Germans suffered heavy casualties, but the BEF retreated as a lack of men. The schlieffen plan depended heavily on speed for success and the BEF action in France and Belgium delayed their plan and gave time for France to launch a counter attack . ...read more.

They also convoyed troops across the channel to enable them to fight on the western front and protected British commerce and shipping. A more offensive role was their attempt to blockade the German coast to starve Germany into defeat. In the early years of the war there were two sea battles. The Germans lost three light cruisers at heligoland in august 1914 and the cruisers blucher at dogger bank in January 1915.by July 1915 allied sea power controlled the oceans so they could gain maximum blockade. By the end of 1916 Germany was suffering from the effects of the blockade and the lack of imported fertiliser resulted in poor harvests which lowered the resistance of the Germans to disease and led to an increase in the death rate within Germany in 1917 and 1918.the most effective action taken by the British government against u boats was the introduction of armed convoys in April 1917.this meant that merchant ships travelled in groups across the Atlantic and were guarded by warships. ...read more.

They were needed as the war lengthened and the work of these 'munitionettes' was important. Woman also did other jobs which they never have done before like mechanics, window cleaner, fire fighters and steel making etc. Conclusion After looking at all the reasons, which contributed, to the defeat of the Germans in WW1 I think that BEF was the most pivotal reason why the German were defeated. I think this because THE Schlieffen plan depended a great deal on the speed of this plan as they were to beat the East and then go fight the West and the BEF managed to delay the plan and eventually the plan failed. This then lead to trench warfare, battles at sea and ground and everything else that happened after the Schlieffen plan. IF the BEF had never intervened there is a big possibility that the Schlieffen plan would have been successful and not lead to the Germans being defeated. The BEF also won the battle for the channel ports which allowed the allies to continue transport troops and supplies to France through these ports. By Alex Coutinho ...read more.