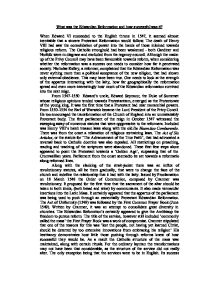 What was the Edwardian Reformation and how successful was it?

What was the Edwardian Reformation and how successful was it? When Edward VI succeeded to the English throne in 1547, it seemed almost inevitable that a sincere Protestant Reformation would follow. The death of Henry VIII had saw the consolidation of power into the hands of those inlcined towards religious reform. The Catholic stronghold had been weakened - both Gardiner and Norfolk were in disgrace and excluded from the regency council. Although the make-up of the Privy Council may have been favourable towards reform, when considering whether the reformation was a success one needs to consider how far it penetrated society. Nicholas Ridley, a reformer, complained that the Edwardian Reformation was never aything more than a political acceptance of the new religion, that had shown only external obedience. This may have been true. One needs to look at the strength of the appartus interacting with the laity, how far geographically the reformation spread and even more interestingly how much of the Edwardian reformation survived into the next reign. From 1547-1550 Edward's uncle, Edward Seymour, the Duke of Somerset whose religious opinions tended towards Protestantism, emerged as the Protectorate of the young king. It was the first time that a Protestant had near monarchial powers. ...read more.

When considering how successful the Edwardian reformation was when put against the rebellion it can be evaluated in two lights. In the one the Edwardian Reformation was clearly successful in ensuring that new ideas were reaching people, on the other they had been unsuccesful because, at least here, the people had rejected it. On the other hand, the second rebellion of the period, the so-called Kett's rebellion in Norfolk, had been primarily concerned with the issue of enclosures, and appeared to have embraced the new religion. Matthew Parker actually preached under the 'Oak of Reformation'. It was not a movement against the Protestant policies of the government. It seems that was the Edwardian Reformation had achieved was a diversity in opinion across the realm, at least amongst those that understood the implications of what the government was proposing. When considering the success of the Edwardian Reformation it is important to view the persecutions enacted under the reign of Mary I. Seven that were burned at Smithfield on 7th January 1556 are alleged to have said that they were just following the true Gospel that they heard preached during the reign of Edward VI. ...read more.

It was more an a case of pateince and acceptance, which are the two truly essential requirements of conversion. England certainly moved closer to being Protestant than it had ever been, but it certainly fell short of creating a zealous nation. It is true that the seeds of the reformed religion had been sown and that the Reformation had gone further than it have ever even been contemplated during Henry's reign. However, the Edwardian reformation was still very much a minority movement. It success did not really penetrate further than extremists, such the Council complaied to Cranmer that 'some parishes had removed all their images, some none [and] some had restored those that had been previously removed'. It might be plausible to add that rather than a success the Edwardian Reformation may have caused greater diversity. This can be seen in the conflicting religious doctrines that were entering into England, and even emerging within the revised liturgy. There were also other factors contributing to the push of a Reformation, be them financial, political or religious. It seems it some ways that the Edwardian Reformation saw the risings of people who were willing to exploit the Reformation for whatever ends they desired ...read more.