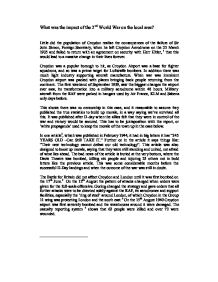 What was the impact of the 2nd World War on the local area?

What was the impact of the 2nd World War on the local area? Little did the population of Croydon realise the consequences of the failure of Sir John Simon, Foreign Secretary, when he left Croydon Aerodrome on the 25 March 1935 and failed to return with an agreement on security with Herr Hitler, 1 that this would lead to a massive change in their lives forever. Croydon was a popular borough to hit, as Croydon Airport was a base for fighter squadrons, and so was a prime target for Luftwaffe bombers. In addition there was much light industry supporting aircraft manufacture. When war was imminent Croydon airport was packed with planes bringing back people returning from the continent. The first weekend of September 1939, saw the biggest changes the airport ever saw, its transformation into a military aerodrome within 48 hours. Military aircraft from the RAF were parked in hangars used by Air France, KLM and Sabena only days before. This shows there was no censorship in this case, and it reasonable to assume they published the true statistics to build up morale, in a way saying we've survived all this. ...read more.

The Battle for Britain did not affect Croydon and London until it was first bombed on the 17th June.2 On the 12th August the pattern of attacks changed when orders were given for the full-scale offensive. Goring changed the strategy and gave orders that all further attacks were to be directed solely against the RAF, its aerodromes and support facilities, especially the 'ring of steel' around London, of which Croydon in the Group 11 wing was protecting London and the south east.5 On the 15th August 1940 Croydon airport was first severely bombed and the warehouses around it were damaged. The casualty reporting system 4 shows that 62 people were killed and over 72 were wounded. The Redwing Aircraft factory is totally destroyed and the whole of the management board of the NSF being killed in the attack. This was not without some cost to the Luftwaffe who lost 3 planes over the airfield.2 It gives the names and addresses of the dead people. Although out of the 62 only 37 had their names and addresses listed. ...read more.

Million pounds2. Some aspects may in the first instance have been questionable, in terms of the populations understanding to the seriousness of the affects of bombing. One local council official ordered 1200 shelters and organised a local meeting to demonstrate the construction and use of the shelters. The audience that turned up was 297. Conversely while the population may not have felt the seriousness of a bombing campaign, a different behaviour was observed. In October 1939, the Surrey Comet reported that on one Saturday alone there 24 marriages in one Register Office. The Superintendent had never been so busy; by the end of the following week that total had risen to more than 100. conflicting reports elsewhere which reports the figure of 3,80010 and which I cannot find a possible explanation. Finally, the post war effect on the Croydon economy and surrounding area was notable in two aspects, firstly the Council created new homes for 20,000 people at New Addington and secondly in order to do so with the labour shortages at the time, recruited large numbers of Commonwealth and Irish citizens, which in turn provided the seeds of the multi cultural population in Croydon today2 ...read more.