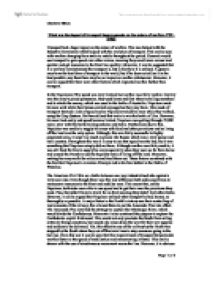 What was the impact of transport improvements on the nature of warfare 1792-1945?

What was the impact of transport improvements on the nature of warfare 1792-1945? Transport had a huge impact on the nature of warfare. This was helped with the Industrial Revolution which helped with the evolution of transport. This can be seen with warfare changing from static to mobile throughout the period. Generals would use transport to gain speed over other armies, meaning they could move across land quicker and get resources to the front line quickly. Moreover, it can be suggested that it is not how revolutionised the transport is, but in fact how it is utilised. A general may have the best form of transport in the world, but if he does not utilise it in the best possible way then there may be no impact on warfare whatsoever. However, it can be argued that there were other factors which impacted warfare further than transport. In the Napoleonic War speed was very limited, but warfare was fairly mobile. Cavalry was the army's prized possession, they used horse and foot when travelling anywhere and to attack the enemy, which was used in the battle of Austerlitz. Napoleon made his men walk while their horses carried any supplies they may have. This mode of transport showed a lack of speed and so Napoleon trained his men while they walked, using the Corp System. He then utilised this tactic to win the battle of Ulm. ...read more.

From this war it can be seen that this improvement of transport helped make warfare faster as the speed of mobilisation and manoeuvring is faster. This can be shown with the use of simultaneous movement across the line. However, it is obvious that transport was important in bringing in resources and soldiers but not actually used in fighting. In the Franco-Prussian War, Moltke made efficient use of the railway. He built mile long platforms which allowed fast manoeuvring and allowed men to preserve energy before battles. Furthermore, platforms were built near the border of France which was useful for the execution of the ring of fire, which was seen in the battle of Sedan and Metz. However, warfare is still cavalry based, there is no transport that can actually be used offensively, as trains were not able to reach the front line. This also meant that when trains delivered resources there was a delay from the platform to the front line. This means that the way the battles are fought is not changed from back to the Napoleonic Wars, instead it changes the strategy which is first produced. Again this war shows how the transport available has been utilised well, yet there is only so much it can do. Like with Napoleon, Moltke has made the best use he can out of what he has got. Railway can only take resources and soldiers so far, meaning that speed is still not fully enhanced in battles. ...read more.

Yet, it can also be argued that it was the change in weaponry which helped impact the nature of warfare too. In conclusion, transport did not actually impact the nature of warfare until world war two. Yet, with the introduction of the railway, transport was constantly used as the heart of tactics. Although it can be seen that the element of speed was crucial in war, and is what every general needed to succeed. For example, Napoleon made his soldiers travel on foot everywhere, not only did it mean they were slow in travelling, it also meant that his men were tired before battle. As the war went on the soldiers became more and more tired and so more were needed to be able to fight. This combined with Napoleon's inability to supply his soldiers with resources helped in his defeat. Whereas, Moltke and Lee, who effectively used the railway were successful in their battles. Not only did they use them to transport men and resources but they proved that transport was the key to a master plan. As more transport was introduced, such as tanks and aeroplanes, then the nature of warfare was impacted. The lethality increased and made warfare mobile again. Soldiers and provisions were able to be transported back and forth efficiently and promptly. This also helped warfare become more offensive as transport was used a weapons as well. ?? ?? ?? ?? Charlotte Bilton Page of 2 ...read more.