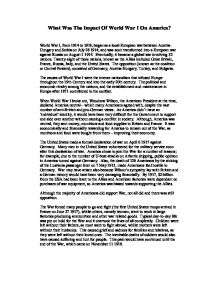 What Was The Impact Of World War I On America?

What Was The Impact Of World War I On America? World War I, from 1914 to 1918, began as a local European war between Austria-Hungary and Serbia on July 28 1914; and was soon transformed into a European war against Russia on August 1 1914. Eventually, it became a global war involving 32 nations. Twenty-eight of these nations, known as the Allies included Great Britain, France, Russia, Italy, and the United States. The opposition (known as the coalition or Central Powers), consisted of Germany, Austria-Hungary, Turkey, and Bulgaria. The causes of World War I were the intense nationalism that infused Europe throughout the 19th Century and into the early 20th century. The political and economic rivalry among the nations, and the establishment and maintenance in Europe after 1871 contributed to the conflict. When World War I broke out, Woodrow Wilson, the American President at the time, declared America neutral - which many Americans agreed with, despite the vast number of anti-British and pro-German views. As America didn't have an 'individual' identity, it would have been very difficult for the Government to support one side over another without causing a conflict in society. Although, America was neutral, they sent money, munitions and food supplies to Britain and France. It was economically and financially rewarding for America to remain out of the War, as munitions and food were bought from them - improving their economy. ...read more.

Many African- America immigrants fulfilled these applications, providing them an income, although not sustainable, which allowed people to buy goods that they otherwise may not have been able to afford. This would also have benefited the local economy as more money would have been spent in shops. However, despite all the positive affects of the War, there were a number of negative affects. For example, four million soldiers were de-mobbed in 1919. There was also mass unemployment, as many industries before and during the War had expected high levels of production and so let go of many employees. After the War, these soldiers had difficulty in finding new employment. Likewise, due to the War, prices had doubled, but earnings had barely risen. As a result, people had trouble affording goods and produce. Many workers demanded higher wages in order to combat the price increases, but employers realised that high unemployment gave them a power and influence; and so bosses failed to compromise. A wave of violent strikes went on throughout 1919 as a consequence to this. White Americans believed that they were being deprived of work, or forced to accept lower wages because of the abundancy of cheap labour available in the form of immigrants. There were also many fears of radicalism. The Communist revolution in Russia had been triggered by the War in Europe. In the USA, two Communist parties formed in 1919, where rebels and anarchists began a wave of bomb attacks. ...read more.

The majority of Americana believed immigrants were the cause to all of their problems; which led to widespread intolerance towards foreigners. The migration from the southern rural areas had begun in the 1890's, but reached its peak of an estimated 500,000 African- Americans during the War. This aggravated long-established racial tension between blacks and whites causing conflict and many social problems. As a result, there were many incidents of race riots between 1917 and 1919; - there were riots in 23 cities throughout America. The Black community in particular faced attacks from Whites - a reaction to the discrimination and poor economic circumstances faced by all Americans after the War. In conclusion, the First World War had a negative impact on America. During the War however, America's economy did boom, which could give the impression that they benefited from the War whilst it was taking place. Nether the less, there were more problems caused than were solved. When the War ended in 1918, America's economy declined resulting in mass unemployment of true white Americans, as immigrants provided cheaper labour for employers. This created racial tension and discrimination, resulting in many social problems which all had to face. This led to many race riots and violent strikes - again causing tension and hostility between workers and employers. The views towards immigrants declined leading to the number of immigrants being limited by Harding and the Government. This, together with the customary pain of war and conflict, shows that the War had negative effects on the American public and all those living in America at the time. ...read more.