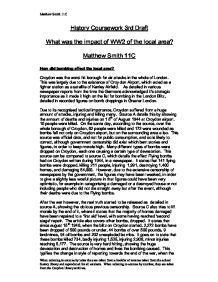 History Coursework 3rd Draft What was the impact of WW2 of the local area? Matthew Smith 11C How did bombing affect the local area? Croydon was the worst hit borough for air attacks in the whole of London. This was largely due to the existence of Croydon Airport, which acted as a fighter station as a satellite of Kenley Airfield. As detailed in various newspaper reports from the time the Germans acknowledged it's strategic importance as it made it high on the list for bombing in the London Blitz, detailed in recorded figures on bomb droppings in Greater London. Due to its recognised tactical importance, Croydon suffered from a huge amount of attacks, injuring and killing many. Source A details this by showing the amount of deaths and injuries on 15th of August 1944 at Croydon airport. 10 people were killed. On the same day, according to the source, over the whole borough of Croydon, 62 people were killed and 172 were wounded as bombs fell not only on Croydon airport, but on the surrounding area also. This source was official data, and not for public consumption, and so is likely to correct, although government censorship did exist which bent stories and figures, in order to keep morale high. Many different types of bombs were dropped on Croydon, each one causing a certain type of devastation. This source can be compared to source C, which details the effect Flying bombs had on Croydon written during 1944, in a newspaper. ...read more.

Source 3 from the Croydon archives is from the national newspaper, The Daily Mail and is undated. It states that 3 out of every 4 houses in Croydon have been more or less damaged. It goes on to state that that it is the worst hit borough by the V1 missile, with 8 bombs in a single day, 15 on one weekend. It compares the attacks to those on Coventry, although percentage figures for destruction of houses in Croydon are even worse than in Coventry. It goes on to report eyewitness's accounts of devastation that they experienced and finishes with a table of worst hit boroughs in London, with Croydon at the top of that list. These news stories detailing the devastation the Germans had caused to Croydon would justify the inevitable retaliatory strikes the allies would make on Germany and Japan now they were in control of the war. To stop bombers from hitting their targets the black out was introduced. Source E, Air Raid Precaution information, details this and was shown in 'permanent and prominent positions' throughout the borough. The source has a very serious and factual tone, full of commands and instructions. It is produced by the government and gives details on the black out. It states that all windows, skylights, doors or openings must be screened and no lights can be used in rooms unless they are screened. ...read more.

Therefore, it would not be reliable to take specific data from it. Instead, to gain a more accurate picture, you would use a source published after the war such as source A published after the war, but detailing an event on August 15th 1944. From the careful analysing of sources, I have been able to build up a picture of the devastation that bombing caused to Croydon. Evaluation of the sources allowed me to gain an accurate insight into the way bombing affected the local area, carefully taking evidence from the most reliable type of source for the information needed, documents/newspaper articles published during the war, confidential documents, official documents and documents/newspaper articles published after the war. Many lives, homes and businesses were destroyed and everyone was affected in big ways. It was not only Croydon, which suffered but cities and towns across the country, although from my research, Croydon suffered very badly. Air Raid attacks brought Croydon to the frontline in a way that never occurred in World War 1, and brought with it devastation, death and carnage, which newspapers tried to show the bright side of. After looking behind the headlines however, it is very evident that this bright side hardly did exist. Matthew Smith 11C When referring to sources by letter they are taken from a booklet of sources taken from the school history library and reproduced for all students. When referring to sources by number, they are taken from the Croydon library archives. ...read more.