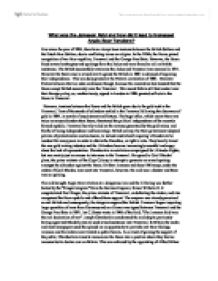 What was the Jameson Raid and how did it lead to increased Anglo-Boer Tensions?

What was the Jameson Raid and how did it lead to increased Anglo-Boer Tensions? Ever since the year of 1806, there have always been tensions between the British Settlers and the Dutch Boer Settlers, due to conflicting views on religion. In the 1850s, the Boers gained recognition of two Boer republics, Transvaal and the Orange Free State. However, the Boers faced severe bankruptcy and uprisings from the Zulus and were forced to call on British assistance. The British successfully overcame the Zulus and Transvaal was annexed in 1877. However the Boers rose in armed revolt against the British in 1881 in demand of regaining their independence. This was duly granted at the Pretoria convention of 1881. However friction between the two sides continued, though, because the convention had insisted that the Boers accept British suzerainty over the Transvaal. ...read more.

Transvaal heavily relied on the revenue generated by the gold mines, and fearful of losing independence and becoming a British colony, the Boer government adopted policies of protectionism and exclusion, to include restrictions' requiring Uitlanders to be resident for many years in order to obtain the franchise, or right to vote. They heavily taxed the new gold mining industry and the Uitlanders became increasingly resentful and angry about the lack of representation. Chamberlain in retaliation campaigned for Uitlander Rights, but was mainly just an excuse to intervene in the Transvaal. He agreed to Cecil Rhodes' plans, the prime minister of the Cape Colony, to attempt to generate an armed uprising amongst the uitlanders against the Boers. Dr Starr Jameson and about 500 troops, under the orders of Cecil Rhodes, were sent into Transvaal, however, the raid was a disaster and there was no uprising. ...read more.

Jan C. Smuts wrote in 1906 of the Raid, "The Jameson Raid was the real declaration of war". Joseph Chamberlain condemned the raid despite previously having approved Rhodes' plans to send armed assistance into Transvaal. In Britain the media and most newspapers used the episode as an opportunity to provoke anti-Boer feelings. Jameson and his raiders were treated as public heroes. As a result of gaining the support of the public, Chamberlain aimed to manoeuvre the Boers into a position where they had no recourse but to declare war on Britain. This was achieved by the appointing of Alfred Milner as the British High Commissioner who totally believed in total supremacy of South Africa and discriminated against the Boers. Kruger, reluctantly declared war on the British in October 1899, when the British troops refused to withdraw from the Transvaal border. ...read more.