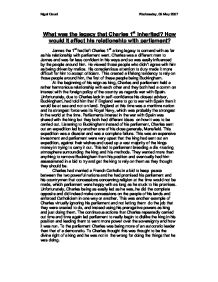 What was the legacy that Charles 1st Inherited? How would it affect his relationship with parliament?

What was the legacy that Charles 1st Inherited? How would it affect his relationship with parliament? James the 1st had left Charles 1st a long legacy to contend with as far as his relationship with parliament went. Charles was a different man to James and was far less confident in his ways and so was easily influenced by the people around him. He viewed those people who didn't agree with him as being driven by malice. His conscientious attention to duty made it more difficult for him to accept criticism. This created a lifelong tendency to rely on those people around him, the first of these people being Buckingham. At the beginning of his reign as king, Charles and parliament held a rather harmonious relationship with each other and they both had a common interest with the foreign policy of the country as regards war with Spain. Unfortunately, due to Charles lack in self-confidence his closest advisor, Buckingham, had told him that if England were to go to war with Spain than it would be at sea and not on land. ...read more.

This was another example of Charles virtually ignoring his parliament and not letting them do the job that they were created to do, and instead using his prerogative powers as king and just doing them. The continuous actions that Charles repeatedly carried out time and time again led parliament to really begin to dislike the king in his position and leading them to want more power over the sovereignty and how it was run. To the parliament Charles was being more of an autocratic leader than that of a democratic. To Charles thought this was thought to be the divine right of a king and he was not in the wrong for doing the things that he was doing. Charles then made a big mistake when he needed funds. Instead of going to parliament and asking for taxes to be increased and added to create him more money to fuel his war in Europe, he went totally behind parliament and forced much of England's nobility to loan him money under the ruling that he was king and he ordered it of them. ...read more.

Charles believed in the divine right of kings very strongly, but parliament believed in a constitutional Monarchy. The result was disastrous for everyone. Charles dissolved parliament and for eleven years he tried to rule without a parliament at all, alienating the country with the taxes he apposed illegally. When parliament reassembled, Charles tried to arrest five of his opponents in the commons. What followed was to be the only Civil War in English history. The king's side was defeated and the parliamentarians put him on trial for going to war against his own people. The break down between the king and parliament had led to Civil War the likes of which had never been seen before in England. Much of the breakdown between king and parliament was the result in misunderstandings and errors on the parts of both the sides. In my opinion parliament wanted the kings power and they had misinterpreted what their rights as a parliament actually where but the king was also to blame in many ways. These misunderstandings and errors where never to be repeated again. Nigel Caunt Wednesday, 09 May 2007 ...read more.