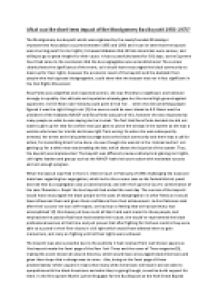 What was the short term impact of the Montgomery Bus Boycott 1955-1957?

﻿What was the short term impact of the Montgomery Bus Boycott 1955-1975? The Montgomery bus boycott which was organised by the newly founded Mississippi Improvement Association occurred between 1955 and 1956 and it can be seen that the boycott was a turning point for civil rights; it showed Alabama that African Americans were serious, and willing to go to great lengths for their cause. It has successfully lasted for 381 days, as the Supreme Court had come to the conclusion that the bus segregation was unconstitutional. The success clearly shows the significance of the event, as it would have encouraged the black community to stand up for their rights, however the economic result of the boycott and the backlash from people who had opposed desegregation, could show that the boycott was not in fact significant in the Civil Rights Movement. Rosa Parks was a dignified and respected women, she was friendly to neighbours and believed strongly in equality. Her attitude and reputation already gave her the moral high ground against opponents. As E.D Nixon said ?nobody could point dirt at her? when she did something people figured it was the right thing to do? (1) the source could be seen biased as E.D Nixon was the president of the Alabama NAACP and Rosa Parks was part of this, however she was respected by many people so what he was saying can be trusted. ...read more.

King led the SCLC campaign in Albany, Georgia in 1961/2 and in Birmingham, Alabama in 1963, where he gave his famous ?I have a dream? speech which influenced hundreds of thousands of people, and it could be one of the reasons that led to the Civil Rights Act in 1964, which can only be attributed to King?s achievements in his campaigns, as without him and without the publicity and awareness he bought from his speeches the Civil Rights Act may not have come as soon as it did. When Vice President Lyndon B. Johnson succeeded J.F Kennedy he spoke about his ?developed compassion for the courageous struggles of African Americans during the Civil Rights movement?(7) and the way King had influenced him, which led to Johnson passing the Civil Rights Act. King?s efforts after the Bus Boycott shows that he had been able to make everyone aware of the cause in order to change the Civil Rights laws, and that without the Bus Boycott this would not have been possible. However, it could be seen that the Bus Boycott was not that significant as there were many disadvantages that came from it. The success of the Bus Boycott could suggest that the success of the case for bus desegregation was mainly for economic reasons and not in fact for justice and equality for the African Americans. ...read more.