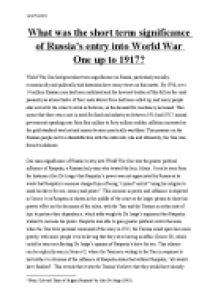 What was the short term significance of Russias entry into World War One up to 1917?

﻿Lara Hopkins What was the short term significance of Russia?s entry into World War One up to 1917? World War One had great short term significance on Russia, particularly socially, economically and politically and historians have many views on this matter. By 1916, over 14 million Russian men had been mobilised and the heaviest burden of this fell on the rural peasantry as almost halve of their male labour force had been called up, and many people also moved to the cities to work in factories, as the demand for machinery increased. This meant that there was a rise in need for food and industry so between 1914 and 1917, annual government spending rose from four million to forty million roubles, inflation increased as the gold standard was lost and money became practically worthless. This pressure on the Russian people led to a dissatisfaction with the autocratic rule and ultimately, the Tsar was forced to abdicate. One main significance of Russia?s entry into World War One was the greater political influence of Rasputin, a Russian holy man who treated the heir, Alexie. ...read more.

volume of food that the war would demand and even though there had been great growth in the Russian railway system before the war with the tracks expanding from 13,210 miles in 1881 to 43,850 miles in 1913 (p.14), this still only mainly covered European Russia as the Trans-Siberian Railway from Moscow to Vladivostok which was supposed to connect the remote regions of Russia with the industrialised west remained incomplete in 1914. Lynch expressed the opinion that ?by 1916, stations were no capable of handling freight?[4] and ?less than two years after the war began, the Russian Railway had virtually collapsed?, which shows that the railways did not have the capacity for wartime Russia. This is judgement is suported by Source I, in which Krivoshein writes, ?the railway lines are congested?, so they would have been negatively affected by the war. As the main purpose of this report is to inform the council about agriculture matters, this statement clearly exhibits the significance of the problems caused by Russian transport during the First World War because if it had not been a major issue that affected the movement of food, it would not have been mentioned in a report which is not focussing on transport issues. ...read more.