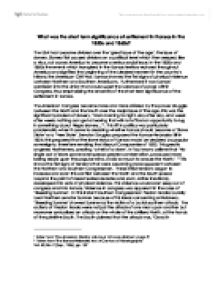 What was the short term significance of settlement in Kansas in the 1850s and 1860s?

What was the short term significance of settlement in Kansas in the 1850s and 1860s? The USA had become divided over the 'great issue of the age', the issue of slavery. Slavery first caused divisions on a political level which then seeped, like a virus, out across America to become a serious social issue. In the 1850s and 1860s the events which transpired in the Kansas territory echoed throughout America and signified the beginning of the bleakest moment in the country's history; the American Civil War. Kansas showed the first signs of physical violence between Northern and Southern Americans. Furthermore it was Kansas' admission into the Union that would upset the balance of power within Congress, thus emphasising the enormity of the short term significance of the settlement in Kansas. The American Congress became more and more divided by the power struggle between the North and the South over the major issue of the age, this was the significant problem of slavery. 'From morning to night, day after day, and week after week, nothing can get a hearing that will not afford an opportunity to lug in something about Negro slavery...'1. This rift in politics was particularly problematic when it came to deciding whether Kansas should become a 'Slave State' or a 'Free State'. Senator Douglas proposed the Kansas-Nebraska Bill in 1854; this proposed that the slave status of Kansas would be decided by popular sovereignty, therefore revoking the Missouri Compromise of 1820. ...read more.

'Whatever apologies may be offered for the toleration of slavery in the States, none can be offered for its extension in the Territories where it does not exist. Let us all protest loudly, by whatever was may seem suitable against this enormous crime.'6 Had the Independent Democrats succeeded in preventing the bill and found a new method of dealing with Kansas they may have been successful in, at least, preventing the violence within Kansas and possibly even preventing the Civil war that followed. However, this was far from achieved. Douglas' bill, that aimed to create a fair state, merely divided America further and created enormous tensions both politically and socially over the settlement of Kansas. An event of serious significance caused by the settlement within Kansas was the bloodshed that came from the splitting of the governances and the conflict within the territory, the major bloodshed took place between 1854 and 1857, this was known as 'Bleeding Kansas'. This was of such high significance as it showed that the American people were willing to kill for their cause. Bleeding Kansas was, in effect, a mirror image of the American Civil War that was to soon follow, only on a smaller scale. The violence and hatred that was displayed within Kansas ruined both the economy and what little hope there had been for political unification. Kansas was torn apart by the fierce fighting that took place within its borders. ...read more.