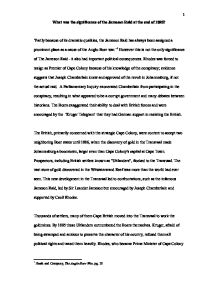 What was the significance of the Jameson Raid at the end of 1895?

What was the significance of the Jameson Raid at the end of 1895? 'Partly because of its dramatic qualities, the Jameson Raid has always been assigned a prominent place as a cause of the Anglo-Boer war.'1 However this is not the only significance of The Jameson Raid - it also had important political consequences. Rhodes was forced to resign as Premier of Cape Colony because of his knowledge of the conspiracy; evidence suggests that Joseph Chamberlain knew and approved of the revolt in Johannesburg, if not the actual raid. A Parliamentary Inquiry exonerated Chamberlain from participating in the conspiracy, resulting in what appeared to be a corrupt government and many debates between historians. The Boers exaggerated their ability to deal with British forces and were encouraged by the 'Kruger Telegram' that they had German support in resisting the British. The British, primarily concerned with the strategic Cape Colony, were content to accept two neighboring Boer states until 1886, when the discovery of gold in the Transvaal made Johannesburg a boomtown, larger even than Cape Colony's capital at Cape Town. Prospectors, including British settlers known as "Uitlanders", flocked to the Transvaal. The vast store of gold discovered in the Witwatersrand Reef was more than the world had ever seen. This new development in the Transvaal led to confrontations, such as the infamous Jameson Raid, led by Sir Leander Jameson but encouraged by Joseph Chamberlain and supported by Cecil Rhodes. ...read more.

The telegram also encouraged the Boers in the mistaken belief that they could expect German aid in case of conflict with Britain. As an eyewitness to events in South Africa, J.A Hobson assembled piles of statistics and corroborating arguments for his view that capitalist interests drove the war. In the Boer War, Rand millionaires such as Cecil Rhodes embodied the general idea that capitalist interests rather than Uitlander grievances were the real cause of the conflict. Hobson believed that Rhodes backed Jameson in an attempt to open the Transvaal to his corporate mining interests. However, the significance of Rhodes does not end there. He remained a key figure for other reasons, for instance, though Rhodes may not have had ultimate control of the Jameson Raid, Rhodes and his associates owned the South African newspaper-publishing network, 'a small confederacy of international financiers working through a kept press'2, and this translated into a great deal of control over British home opinion. Rhodes personal and business sympathies with the Uitlanders in the Transvaal, led him to conspire against the government of Paul Kruger. Although Rhodes did not approve the timing of the raid, he was so clearly implicated that he was forced to resign as Prime Minister in 1896. In 1897 a committee of the British House of Commons pronounced him guilty of grave breaches of duty as prime minister and as administrator of the British South Africa Company. ...read more.

Her only substantial difference from van der Poel is that she did not accept that the Committee of Enquiry was actually fooled by Chamberlain's verbal maneuver. Rather, they were quite aware of the real implications of his sophistry, but discontinued the investigation and allowed the public to believe that Chamberlain was innocent out of patriotism and a desire to avoid further scandal. The result of the Jameson Raid was disastrous: it signified to the rest of the world that Britain had authorized the unprovoked invasion of a foreign state. The raid offended the Orange Free State and the Cape Boers; it confirmed all Kruger's fears about British intentions and he continued to arm heavily. When one looks back in history at imperialist expansion, it appears the consequences of the raid could have been avoided if the responsible minister and his party suffered the ordinary constitutional penalties. When the opposite course was taken, a tragic error had been made. War was not inevitable at this stage, though 'the shielding of Chamberlain had much to do with the coming of war. It left a determined, and temporarily discomfited, imperialist in power. And it aroused in the minds of the Afrikaners a deep suspicion of the Government that he dominated.'6 It could be said that the Jameson raid not only signified a corrupt government but also the beginning of the end of the British Empire. ...read more.