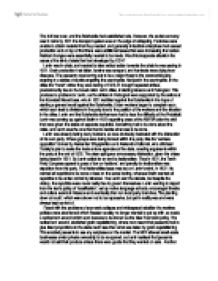 what was the situation in russia when bolsheviks came into power

The civil war over, and the Bolsheviks had established rule. However, the soviet economy was in ruins by 1921 the transport system was on the edge of collapsing. Factories were unable to obtain material that they needed, and generally industrial enterprises had ceased production and on top of that there were additional issues that were increasing the burden. Radical changes were essentially needed to be made. Was this desperate situation the cause of the kind of state that had developed by 1924? Lenin was in crisis, and needed to take radical action towards the crisis he was seeing in 1921. Grain production had fallen, famine was rampant, and hundreds were dying from diseases. The peasantry was turning out to be a major threat to the communist party, erupting in a series of revolts engulfing the countryside. Not just in the countryside, in the cities the ''harsh' winter they were facing of 1920-21 brought repeated strikes, predominantly due to the bread ration cut in cities, including Moscow and Petrograd. This produced a problem for Lenin, as the strikers in Petrograd were supported by the sailors at the Kronstadt Naval base, who in 1921 mutinied against the Bolsheviks in the hope of starting ...read more.

this Faced with the problems of economic collapse and widespread rebellion the wartime policies were abandoned which Russian society no longer wanted to put up with, so made a radical turn around which soon became to be known as the New Economic policy. The radical turn around, abolished grain requisitioning, where now meant that peasants had to give fixed proportions to the state much less than what was taken by grain requisitioning. This enabled peasants to see any surpluses on the market. The NEP allowed small-scale businesses under private ownership to be re-opened, as Lenin realised that peasants would not sell their produce unless there were goods that they wanted on sale. Another feature of the NEP was the removal of the ban on private trade which allowed food and goods to pass more easily between the countryside and towns, thus, rationing was abolished. The policy, allowed the state to keep control of large-scale heavy industries like coal, steel and oil. In addition, it retained control of the transport system. The NEP was answering and implementing radical changes to the economic crisis, and the widespread rebellion. ...read more.

The communists also mounted a fierce attack on the church in 1922, orders were sent out to strip churches of their precious items, apparently to help famine victims, when really they believed the church to be a rival to the government's power. The policy changes of 1921 had a major impact on the development of the state by 1924. Despite the 1924 scissors crisis the NEP had helped Russia economically and resolved the widespread rebellion. The policy led to political repression, which strengthened control. Despite the clear view that the radical changes made were partly due to Lenin's desperation in the face of crisis, it did resolve the problems but to what extent. What type of state was left in 1924? Had the policies developed a centralised state, a totalitarian state, or a bureaucratic state, what was the end result? In my view the radical changes left a totalitarian state. Yes it could be argued that what had developed was bureaucratic or centralised due to the Nationalities issue, the GPU and the other issues. But looking at the final result of the policies, I believe the state was left in greater control, was left as a 'one party government' by 1924. ...read more.