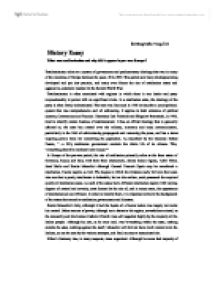 What was totalitarianism and why did it appear in pre-war Europe?

SoMang Estha Yang.12A History Essay What was totalitarianism and why did it appear in pre-war Europe? Totalitarianism refers to a system of government and parliamentary ideology that was in many of the countries of Europe between the years 1918-1939. This period saw many ideologies being developed and put into practice, and many even blame the rise of totalitarian states and aggressive, autocratic leaders for the Second World War. Totalitarianism is often associated with regimes in which there is one leader and party unquestionably in power with no significant rivals. In a totalitarian state, the ideology of the party is often firmly indoctrinated. The term was first used in 1925 to describe a socio-political system that was comprehensive and all embracing. It applies to both extremes of political systems, Communism and Fascism. Historians Carl Friedrich and Zbigniew Brzezinski, in 1956, tried to identify certain features of totalitarianism. It has an official ideology that is generally adhered to, the state has control over the military, economy and mass communication, particularly in the field of administering propaganda and censoring the press, and has a terror inspiring police force for controlling the population. ...read more.

Josef Goebbels, the Nazi chief propaganda administrator, said in 1933 " A totalitarian state must pervade all spheres of life." The Nazis had an extensive terror network with the SS, the SA and the Gestapo, as well as the many concentration and labour camps, and certainly revived the economy, but failed to overcome much religious opposition or nationalize all businesses. Russia, or the Soviet Union, as it became under Stalin, was possibly the most securely totalitarian states, particularly as it lasted until 1988. The terror network was extensive and highly effective in infiltrating the population, and the armed forces grew to have formidable military strength. Propaganda and education indoctrinated the Communist ideology to youth and other citizens and the nationalisation was almost complete in every aspect. Many of the conditions and factors that enabled and nurtured the rise of totalitarianism in Europe can be traced back to the end of the First World War. The Treaty of Versailles, inspired much resentment and hate, particularly in Germany as it was stripped of land, national prestige and money. It also created disappointment in Italy and Japan, as they were allied to the victors, and had been disillusioned into thinking that they would benefit considerably, but were left feeling as if they deserved more than the outcome. ...read more.

The introduction of the idea of democracy to many of the formerly autocratic states led to them desiring a parliamentary democracy like Britain. The Weimar Republic is one of many countries that tried democracy without the population being prepared for it. These governments were poorly organized and soon led to people being more attracted to more extreme, radical parties that had the appearance of organisation and the potential to revive the economy and national pride. The Great Depression caused by the Wall Street Crash of 1929 affected the whole globe, particularly Germany ass it could no longer depend on the loans from the United States to rebuild itself. This led to the abandonment of international co-operation and the focusing on national interests. Many countries went into a policy of isolation and were unable to keep dictators from coming into power, and were not actively interested in the affairs of other countries. Collective security, International co-operation and democracy had largely failed in Europe, which turned and gave rise to totalitarian governments and aggressive dictators to solve their problems and reinstate their national identity, and go back to the "glory days". The dictators used the above failures to their advantage to appeal to a wider audience. itleer ...read more.