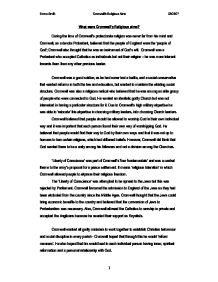 What were Cromwell's Religious aims?

What were Cromwell's Religious aims? During the time of Cromwell's protectorate religion was never far from his mind and Cromwell, as a devote Protestant, believed that the people of England were the 'people of God'; Cromwell also thought that he was an instrument of God's will. Cromwell was a Protestant who accepted Catholics as individuals but not their religion - he was more tolerant towards them than any other previous leader. Cromwell was a good soldier, as he had never lost a battle, and a social conservative that wanted reforms in both the law and education, but wanted to maintain the existing social structure. Cromwell was also a religious radical who believed that he was among an elite group of people who were connected to God. He wanted an idealistic godly Church but was not interested in having a particular structure for it. Due to Cromwell's high military expertise he was able to 'relocate' this expertise in choosing military leaders, into choosing Church leaders. Cromwell believed that people should be allowed to worship God in their own individual way and it was important that each person found their own way of worshipping God. He believed that people would find their way to God by their own ways and that it was not up to humans to ban certain religions, which had different beliefs. However, Cromwell did think that God wanted there to be a unity among his followers and not a division among the Churches. ...read more.

Soon after the dissolution of the Rump, Cromwell wanted to create a new constitution. He wanted to assemble a parliament that would represent the nation and would institute moral reformation and was attracted to the idea of rule by godly men. Once the men were selected for this task it was called the Nominated Assembly or the Barebones Parliament and opened in July 1653. Cromwell was optimistic because the thought that they would introduce religious reforms and create a godly society that would help to solve the religious tension within England, also he thought that he could achieve a stable rule through godly rulers. Cromwell was becoming dissatisfied with the Barebones Parliament because they showed intolerance to their fellow Protestants. Cromwell's first experiment in godly rule ended quickly and efficiently in 1654. The Barebones Parliament became a source of radical hopes and none of this was accomplished. However, the Parliament did manage to pass soon reforms such as the compulsory registration of births, marriages and deaths. Cromwell believed that the only way to achieve a true reformation was to have a set of godly magistrates who could ensure that all the clergy were good and educated men who would lead their people towards moral and spiritual reformation. Cromwell set up his State Church in 1654 and he required that its ministers practiced the fundamental Christian principles and Protestantism. It was because of this that Cromwell set up his ordinances so that his Church appoint and dismiss ministers and clergy, which was a vital issue. ...read more.

Some of the parishes were dominated by the Saints and run on 'godly' lines. One of the main successes was the wide freedom of worship, which was enjoyed among all religious followers. However, there were some failures of Cromwell's religious aims as most parishes only had a small number of Saints, as they were a minority. Also, attendance at church on Sundays was voluntary; some people attended the church no matter what service was being performed while the majority of people would have preferred the old Anglican services. Mainly, the freedom of worship and the use of godly ministers did not lead to the unity that Cromwell had hoped for. Cromwell always hoped that he would achieve a godly nation ruled by godly men and be able to create a 'godly reformation'. Cromwell put his faith in God and hoped that God would work through each individual in parishes. Cromwell wanted to implement a godly reformation through at least one form of government but this did not succeed. It did not succeed because Cromwell did not grant liberty of conscience to Catholics and liberty for all Protestants was not provided. Cromwell thought that religions that disturbed the peace should not be tolerated. Cromwell's religious tolerance gave rise to such radical groups as the Quakers, whose ideas interfered with the working-class. It was the appearance of radical groups and the collapse of the National Church that meant that Cromwell was dependant on the army to enforce the correct form of religion. Cromwell encountered so much resistance to his religious aims as many people, especially Parliament, were not as tolerant of different religions as he was. Emma Smith Cromwell's Religious Aims 03/05/07 1 ...read more.