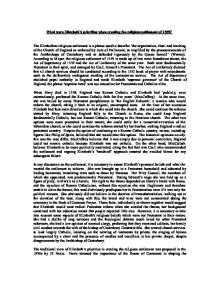 What were Elizabeth's priorities when creating the religious settlement of 1559?

What were Elizabeth's priorities when creating the religious settlement of 1559? The Elizabethan religious settlement is a phrase used to describe 'the organisation, ritual and teaching of the Church of England as enforced by Acts of Parliament, as amplified by the pronouncements of the Archbishops of Canterbury and as defended rigorously by the Queen herself.' (Warren). According to Meyer, the religious settlement of 1559 is made up of two main foundation stones, the Act of Supremacy of 1559 and the Act of Uniformity of the same year. Both were fundamentally Protestant in their spirit, and managed by Cecil, himself a Protestant. The Act of Uniformity dictated that all church services should be conducted according to the 1552 book of prayer with amendments such as the deliberately ambiguous wording of the communion service. The Act of Supremacy abolished papal authority in England and made Elizabeth 'supreme governor' of the Church of England, the phrase 'supreme head' was too masculine for Protestants and Catholics alike. When Mary died in 1558, England was Roman Catholic and Elizabeth had 'publicly, even ostentatiously, professed the Roman Catholic faith for five years' (MacCaffrey). ...read more.

This theory suggests that Elizabeth was firmly in control of what the church settlement included and if any bullying went on it was not by the Commons over her, but by her over the House of Lords. Her settlement was more radical than was acceptable for the largely catholic House of Lords and it was only by manipulation that it was passed. The reason for the largely Catholic sentiments in the House of Lords was not simply the natural conservatism of the peers but the fact that many seats in the lords belonged to bishops who had been appointed in the Marian regime. This naturally meant they were catholic and wary of any changes to the church which inclined it more towards Protestantism. They were willing to accept that, given Elizabeth's personal convictions and politics, a certain amount of change was inevitable. Another reason for their wariness of Protestantism lies in the alternative to episcopacy. The Catholic Church was based upon a hierarchical system through which authority was imposed form the top and filtered down through the various ranks form the Pope to the cardinals to the bishops to the parish priest with other layers in between. ...read more.

Both the Act of Uniformity and the Act of Supremacy seem to be exclusive documents on paper, and as they were designed and written by the Protestant Cecil and the Protestant Privy Council, it is unsurprising that they are largely Protestant in their nature. It is with Elizabeth's intervention that they become more inclusive, the wording of the Eucharist being changed from the Edwardian copy to the more ambiguous Elizabethan version, and the ruling that people cannot be asked to take the Oath of Supremacy twice. The 1559 church settlement was fundamentally a political manoeuvre which aimed to prevent unrest and impose conformity. Although it was Cecil who was in charge of the settlement, it was based on Elizabeth's wishes: to have a non-radical Protestant church which the majority of her subjects would be happy with. To ensure that while the doctrine of the church was largely Protestant, the outward trappings were Catholic in style to give the appearance of continuity. The Neale thesis discredited, Elizabeth was the person ultimately in control of the attitude of the settlement, it could include little of which she did not approve. She intended a Protestant-catholic hybrid for political and personal reasons as her main priority was conformity. Without a hybrid church there was radicalism, with radicalism there was unrest and for Elizabeth, unrest was to be avoided. ...read more.